Social media is ubiquitous. Yet few filmmakers have really tapped into how people interact with and through their preferred platforms. That's why Mamoru Hosoda stands out. He may have gained louder international acclaim for the light fantasies of The Girl Who Leapt Through Time and Mirai, but his idiosyncratic 2010 family-vs-rogue-AI dramedy Summer Wars really engaged with the allure and dangers of a virtual world.

A decade later, and his ideas receive a next gen upgrade with Belle, a complex but incredibly accessible look at online life in all its dark menace and strange potential.

Of course, part of the appeal of online life is anonymity, and that's why Suzu (Nakamura in the original Japanese version, Kylie McNeill in the English-language dub) lives her alternate life as Bell, the newest pop sensation in the VR cosmos that is U. Suzu's carrying deep trauma from what she sees as the ultimate abandonment: Her mother died saving a stranger, and now she can't sing – at least IRL. Within the liberty of U, she's able to truly vocalize as Bell: The word is a literal translation of Suzu, but she becomes known as Belle, a name more befitting the ethereal freckled pop princess that flies through the air on a giant whale outfitted with speakers. It's the kind of raw, gorgeous spectacle that hinky software like Facebook's Metaverse can only dream of providing, but her online paradise is devastated by the trail of destruction blazed by the Dragon (Satoh/Paul Castro Jr.), a mysterious horned and fanged beast caught up in his own destructive anger. Yet Bell sees something else ...

Yes, Belle draws in part on the story of Beauty and the Beast, but Hosoda (who both directed and wrote the script) isn't interested in a straightforward love story across the internet. Just as Summer Wars wove in a multigenerational aspect to our ongoing love affair with technology, so Belle has a broader perspective, one that is revealed slowly as Belle and her best friend/manager, Hiroka (Ikura/Jessica DiCicco, whose avatar seems to be an Easter egg for Hosoda's early work on Digimon), scour the internet for clues about who he really is. Anonymity, secrets, and identity are at the core of his story, and it's rarely a simple intersection between those forces.

And much as Summer Wars understood social media by creating an online experience that didn't just feel like a ripoff of an existing platform, so Belle's U feels convincing because it feels real. As in, it feels like how people would use it. Hosoda's internet isn't just about dropping a few emojis on a script, but instead makes real points about casual cyberbullying, megalomaniacal moderators, and about how our online lives impact the world away from the screen. Everyone has secrets, Hosoda posits, and the internet may play a role in our ability to process them, heal our wounds, and maybe find the person who can save us from ourselves. That he does that through a gorgeous SF-tinged version of a classic fairy tale is not simply a bonus (just those components would have made a memorable new version of Villeneuve's timeless story). It's a vital act of recontextualization, not ham-fisted revisionism. 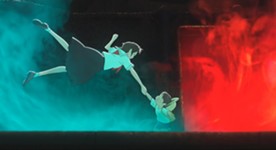 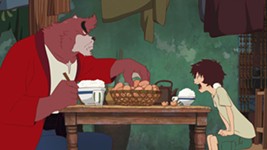