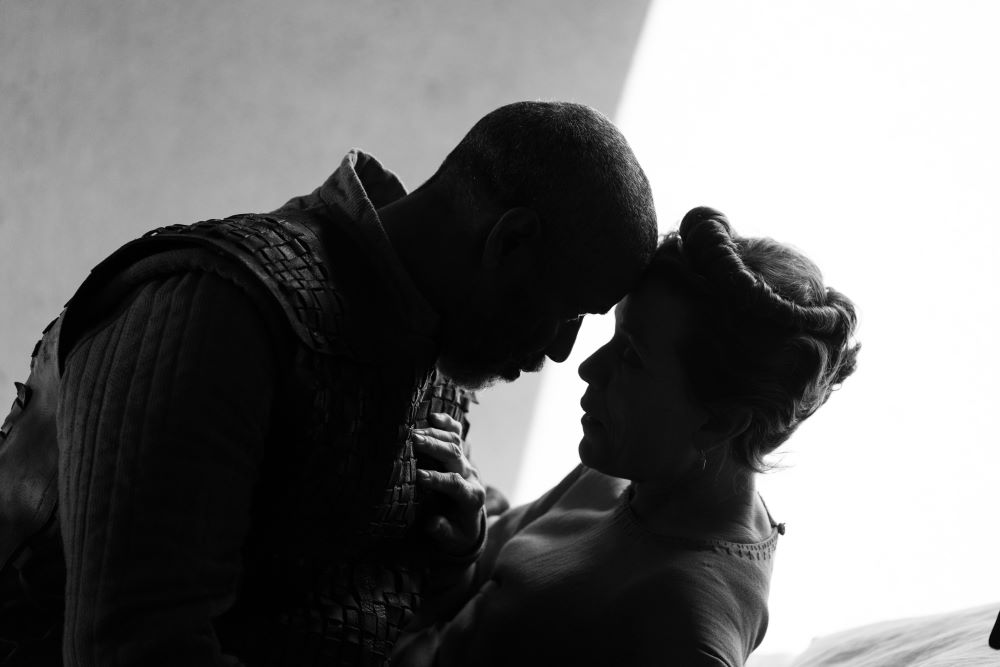 The Tragedy of Macbeth

There’s something about engaging with Shakespeare that instantly takes me back to middle school: musty, library-bound paperbacks, monotone soliloquies in iambic pentameter recited by bored 12-year-olds, an ancient TV wheeled in for the Zeffirelli film. An inauspicious beginning, for sure. But after trudging through Taming of the Shrew (still a chore, btw), to then be introduced to a power-hungry lord who ruthlessly carves a bloody path to the throne of Scotland? My adolescent ears pricked up. Witches, slaughtered children, madness, and revenge were right up my alley. Still are, really. Macbeth remains my personal favorite of the Bard’s work, and this wicked adaptation from a singular Coen brother (the scruffy one) has now become the same.

From the starkly beautiful black-and-white images cast in the proscenium arch of a 4:3 frame, to the effortless way Elizabethan English rolls off Denzel Washington’s tongue, this version is immediately startling in how familiar yet otherworldly it all feels. Scotland is an eternally cloudy and lifeless place and Stefan Dechant’s production design compounds this unnerving atmosphere with the foreboding columns and shadows of Giorgio de Chirico. Spilled from this alien land comes a trio of witches (a thrice welcome Hunter), all limbs and prophecy, propelling Macbeth (Washington) to his traitorous fate, poor Banquo (Carvel) to his death, and Lady Macbeth (McDormand) to her fatally overwhelming guilt.

The cast is uniformly superb, led by Washington and McDormand as the increasingly desperate (and here older) couple. Alex Hassell as Ross, the informal narrator of the film buffed up to a much larger role in Coen's script, is a perfect mixture of distance and empathy, and his wardrobe is to die for. As Macduff, Corey Hawkins displays a swagger of steely eyed vengeance, but it is an unforgettable Kathryn Hunter as the three witches who carries away the entire film on her crow’s wings. She’s like a menacing Martha Graham on acid. The whole film has a hallucinogenic quality to it, perfectly suited for the filmmaker’s trademark dark wit, as he traces characters making increasingly flawed, and ultimately violent, decisions. Joel Coen’s The Tragedy of Macbeth is an outstanding gem of form and content, and I take solace that future generations of English students now have a new text to learn from.