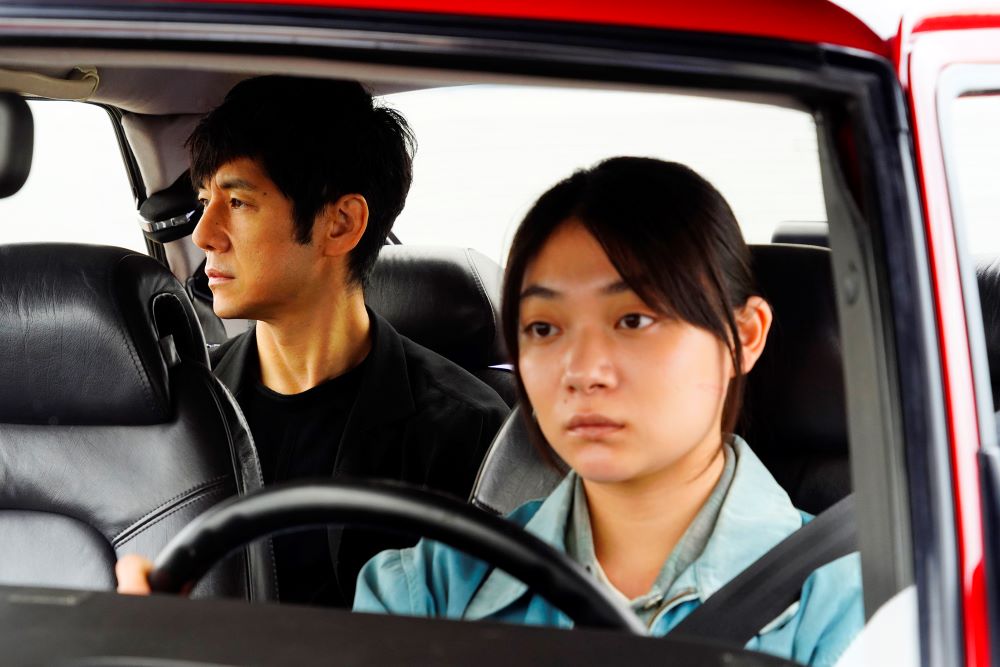 Drive My Car opens with a shot of a woman, naked, the sunset behind her illuminating her silhouette. It’s a shot that’s reminiscent of another Haruki Murakami adaptation, Burning’s famed shot of Shin Hae-mi dancing topless to the sunset. The woman, Oto (Kirishima), begins to monologue, telling a story about a young high school girl who sneaks into a classmate’s house while the family is out. She is ethereal and magnetic, almost otherworldly in her storytelling daze, and her husband, Yûsuke Kafuku (Nishijima), is captivated and in love. There comes a day where that love is challenged, though, when Kafuku walks in on his wife having sex with one of her actors, creating the complicated rift in emotions that tunnels into Yûsuke like a burrowing snake.

Oto is not around for the entirety of Drive My Car, but her presence lingers and the mystery and memory of her haunts Yûsuke. Hamaguchi is adept in character study, his films unfolding as if they were novels, totally consuming. Yûsuke’s car is the safe space where he can remember Oto, her voice surrounding him from a tape she gave him to help with reciting lines. It’s a comforting pattern that’s disrupted when he takes on a residency directing the very play Oto is line reading for, Anton Chekhov’s Uncle Vanya. Per the rules of the theatre program, he is not allowed to drive his car (car accidents in the past have put the program in hot water), so he is given a driver, Misaki Watari (Miura).

Where Oto’s spirit was powerful, Misaki’s is soft, a consoling counterbalance. Her smooth driving creates a space for catharsis, a therapy room for Yûsuke and Misaki as well. Their distinct connection lays the groundwork for recovery that these two characters have been averse to thus far. While Misaki’s past unfolds very delicately during conversations, Yûsuke’s past lingers around him, little reminders of the worst moments of his life, forcing him to confront the very moment his love for Oto felt threatened.

Drive My Car is a perfect storm of coincidences. The intensity starts to build when Oto’s lover, Kôji Takatsuki (Okada), shows up to audition for Uncle Vanya. It’s a threatening move, but Yûsuke is game to play chess with Kôji, pushing him further by casting Kôji in the lead role that everyone assumed Yûsuke would take himself. Hamaguchi’s use of the mirror builds a strong visual motif – Yûsuke witnesses his wife’s adultery through a mirror, and is painfully reminded of it during Kôji’s intense audition when he pushes his acting partner, Janice Chan (Yuan), up against the room’s floor-to-ceiling mirror. Kôji and Yûsuke’s relationship is flooded with strife, one unsure of how much the other knows, and this uncertainty builds a burning intensity.

Hamaguchi’s films, from Happy Hour to Asako I & II, are all explorations of love, the complex, overwhelming emotion that has the power to break your heart. Drive My Car dissects that heartbreak, what it means to love someone and how to come to terms with that love once they are no longer around to fix what was broken. To love someone after they’re gone is painful, an experience that feels so lonely in its one-sided nature. Yûsuke and Misaki’s platonic bond, formed in the cleansing space of a red Saab 900, lets two characters give into that loneliness together, a space more suitable for the winding road of grieving than any temple can offer. 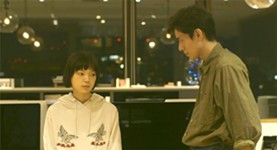 Wheel of Fortune and Fantasy
Longing and loss explored in this stunning, tender anthology