When Steven Spielberg announced his intent to direct a second adaptation of the Shakespeare-inspired 1957 stage musical West Side Story for the big screen, a collective eyebrow cocked quizzically: Why? Although a little square around the edges today, the 1961 film adaptation of Broadway’s urban reimagining of Romeo and Juliet remains a creatively alive work, stylistically vibrant and full of audacious energy. (The dark greasepaint slathered on some the actors to emphasize their characters’ Latin heritage, however, remains unforgivable.) The can’t-miss holy trinity of Leonard Bernstein’s score, Stephen Sondheim’s lyrics, and Jerome Robbins’ choreography, stewarded by craftsman director Robert Wise, converged into a wildly popular success, becoming that year’s highest-grossing film and the winner of 10 Oscars. So, the question becomes: Is a remake warranted? Or better yet: Who’s going to tell the King of Hollywood otherwise?

Happily, this new film version of the groundbreaking musical doesn’t tinker with what ain’t broke. The glorious songs remain intact, albeit slightly reshuffled, though one (“Somewhere”) is questionably reassigned to a new character, Valentina, the film’s voice of reason as meta-played by the estimable Rita Moreno, who won an Academy Award 60 years ago for her performance as Anita in the original film. The script by Tony Kushner, a frequent Spielberg collaborator (Munich, Lincoln), sharpens the original libretto by Arthur Laurents, retaining the 1950s NYC milieu while inserting some mild profanity to modernize the dialogue. (Yes, the infamous “Krup you!” in Sondheim’s satirical tribute to juvenile delinquency, “Officer Krupke,” is still there.) More pointedly, Kushner’s topical screenplay subtly punches up the prickly issues of ethnic identity and conflict that complicate the romance between multigeneration Polish American Tony (a particularly sensitive Elgort) and immigrant Puerto Rican Maria (Zegler, excellent in her debut), the star-crossed lovers who dare to pursue a romantic destiny beyond their respective tribes. For example, Maria’s ambitious friend Anita (DeBose) is constantly reminding her boyfriend, Maria’s brother Bernardo (Alvarez), to speak English to better assimilate in their adopted homeland, but then resorts to speaking Spanish (without subtitles – a daring but apt choice by the filmmakers) when the racist attitudes of law enforcement threaten her.

While the turf war between the Caucasian Jets and the Puerto Rican Sharks remains the narrative’s accelerant, Kushner cunningly sets that rivalry in a no-man’s-land of twisted metal and crumbled bricks that cinematographer Janusz Kamiński depicts as a postapocalyptic landscape, a desolate ruin of demolished slum buildings where high-rises and high-end establishments will inevitably stand. Yet the lost-boy teenagers on each side continue to rumble over Lincoln Square and San Juan Hill to the death, incapable of comprehending that gentrification will ultimately prevail long after their futile skirmishes. In his first musical number, the recently paroled Tony gazes at his reflection in the polished linoleum floor of Doc’s chemist shop (a literal and figurative oasis amidst the rubble) and hopefully sings of a brighter future, but the real “Something’s Coming” here is bigger than him and everyone else he knows.

Spielberg suppresses his worst tendencies in the uncharted territory of his first movie musical. His solid direction respectfully doesn’t oversentimentalize the material. You may quibble about couple of his musical number choices, such as the decision to restage the spirited rooftop battle of the sexes in “America” as the film’s centerpiece song-and-dance production choreographed by Justin Peck, ending in the street to the applause of a melting pot of bystanders like something out of the Macy’s Thanksgiving parade. But then there’s his thrilling staging of the balcony scene in which lovestruck Tony and Maria sing “Tonight,” a passionately charged duet in which he artfully uses the iron latticework of a fire escape to partially obstruct the lovers’ adoring gazes, until Tony eventually leaps over a railing to face his beloved and nothing seemingly stands in their way any longer. But if Spielberg’s execution of this timeless music performed by a talented cast has you humming as you leave the theater, it’s his instinct for the tragedy in West Side Story, the one senseless killing after another, that will weigh on your heart afterward. Methinks the Bard would be proud. 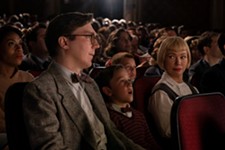