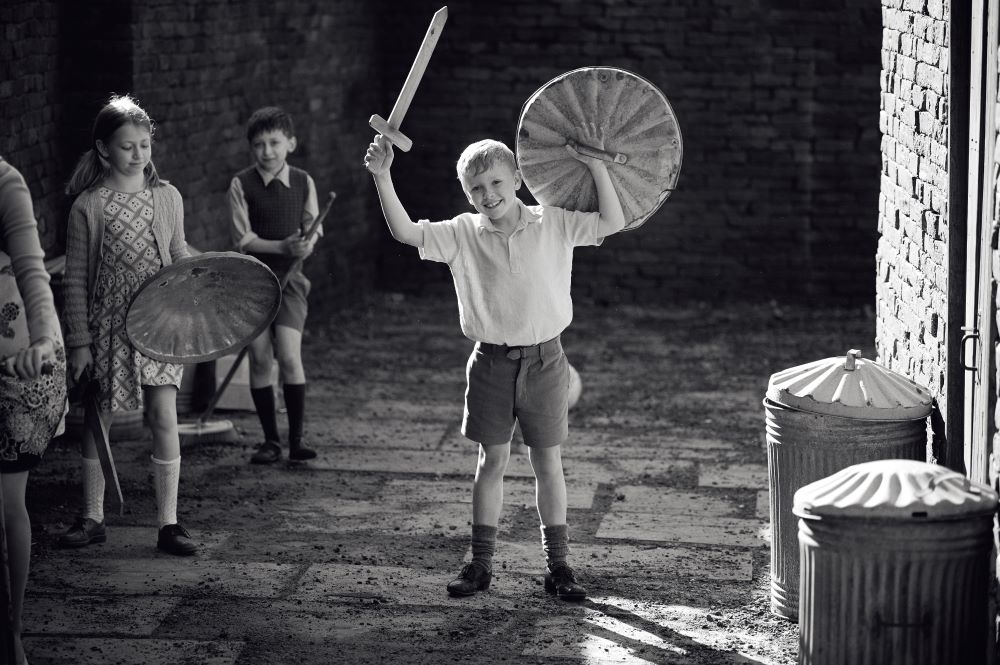 Kenneth Branagh’s semiautobiographical memory piece Belfast begins beautifully, so promisingly. After a vibrantly hued slide show of serene locales in the titular capital of Northern Ireland today, the camera ascends above a muraled wall to dramatically reveal a black-and-white throwback of the city circa August 1969. We’re instantly immersed in the pleasantly chaotic daily life of a Protestant neighborhood, our attention focused on 9-year-old blond-haired and freckled Buddy (Hill), who’s joyfully waving a makeshift wooden sword and wielding a trash can lid like a shield in an innocent game of make-believe war with other children. But the normalcy of the street scene ends abruptly when Buddy comes face to face with an angry masked mob of Unionist agitators intent on violently shattering the urban idyll of this integrated community, where Catholics and Protestants live peacefully as neighbors. They smash windows, lob Molotov cocktails, and throw stones in an explosive show of fury in juxtaposition to Buddy and his mates’ pretend aggressions. This is the world of the Troubles intruding upon Buddy’s childhood, a period of social unrest providing the turbulent backdrop that informs director/screenwriter Branagh’s sentimental, if not always genuine, impressions of his early life as a Belfast-born lad from a working-class family growing up in a torn city.

As the opening scene establishes, we almost exclusively experience this Troubled world through the eyes and ears of Buddy, Branagh’s alter ego. (Both were born in 1960; both attended Grove Park Primary School.) He’s a sensitive boy crazy about movies, wide-eyed and wondrous as he tries to understand what he sees, often perplexed or distressed by the adult conversations he overhears. A loving but fracturing family dominates his life. The most effective scenes in Belfast are the one-on-one interactions between Buddy and his Pa (Dornan), Ma (Balfe), Granny (Dench), and Pop (Hinds) that take place in the first two-thirds or so of the film. One such tête-à-tête is particularly lovely. In response to Buddy’s anxiety about the prospect of moving to England, where his largely absentee father must work due to Northern Ireland’s rampant rate of unemployment, his grandfather gently assures the young boy that his family members will always take care of him, no matter where he or they may be. Hinds is superb here, while newcomer Hill (who has the most screen time) nicely carries the movie regardless of what he’s called upon to do, except when asked to throw a tantrum. With a wide, gap-toothed smile frequently flashed to convey the unadulterated happiness only a child can feel, Hill further brightens longtime Branagh collaborator Haris Zambarloukos’ silvery cinematography, which evokes the writer/director’s perceptions of his youth with monochromatic clarity.

As the family grapples with the dilemma of whether to remain in the country of their long-standing heritage or pursue a safer and more secure life elsewhere, Belfast begins to lose its footing. The micro-homilies proliferate, the stagy drama heightens, and subtlety gives way to a little pandering. You can forgive these transgressions – there’s never any doubt that Branagh has put his heart into this endeavor – but they keep it from achieving greatness. Early in the film, Ma and Pa tenderly demonstrate their love for each other as they sweetly slow dance on their street to a Van Morrison record. In telling contrast, Pa belts out the Sixties pop song “Everlasting Love” at a lively wake near the film’s end, with he and his wife gamboling together as if auditioning for an Irish remake of Dirty Dancing. The first is lyrical and truthful; the second posed and inauthentic, plainly aimed to crowd-please. That’s the tricky thing about memories, particularly those from when you were wee. You recall the things that were said or that happened, as well as those you wish had been said or had happened. It can be a messy, and sometimes glorious, blur.