I’ll tell you right up front, the makers of these animated movies sure do have my number. They know exactly what it is that will make me care about a non-human in whatever form; a robot, a monster, a rat, a toy, a bug … put it in a cartoon and I will fall in love with it. I really should include the movies that feature humans, too, because, boy, was I wracked with sobs in the theatre during Up, Toy Story 2, and The Iron Giant. So, there’s a good chance I’ll cry at some point of an animated movie. Which brings us to Ron’s Gone Wrong.

Poor Barney. Stuck on the dreaded Buddy Bench. There’s nothing more humiliating than sitting there on that bench knowing that no one is going to come over and sit next to you. Even if you’re an old like me, that feeling you had in junior high when you didn’t have friends and you were awkward and you didn’t know why you were here … that’s what he’s feeling. Barney was already kind of an outcast, and then everyone in the school gets a new B-bot. Well, everyone except Barney. These B-bots are a “best friend right out of the box”. They instantly learn all about the owner, and are basically a sidekick/pet/phone all in one. Barney is like most kids: he doesn’t want to tell his dad his problem because he knows his dad is struggling with his own. That’s why, for Barney’s birthday, Dad gets him a gift in which he was no longer interested. What he really wanted was a B-bot, but when Barney gets what he thinks he wants, the bot named Ron doesn’t act as promised.

Did I cry at some point during Ron’s Gone Wrong? Of course, I did. More than once. There are plenty of lessons to learn here, from spending too much time with your tech to being a good friend. The voice acting, which can be a bit stilted in star-driven animated fare (I’m looking at you, What If…?), is great. Jack Dylan Grazer’s Barney was wonderful. Ed Helms as the dad is always good, and Zach Galifianakis as Ron … perfect casting. He totally brought that B-bot to life. I love Ron.

Honestly, this movie is so pure. Take a couple hours out of your weekend and go feel good. 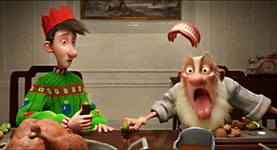 Arthur Christmas
The folks at Aardman Animation, who gave us Wallace & Gromit, seve up an instant – and funny – holiday classic.