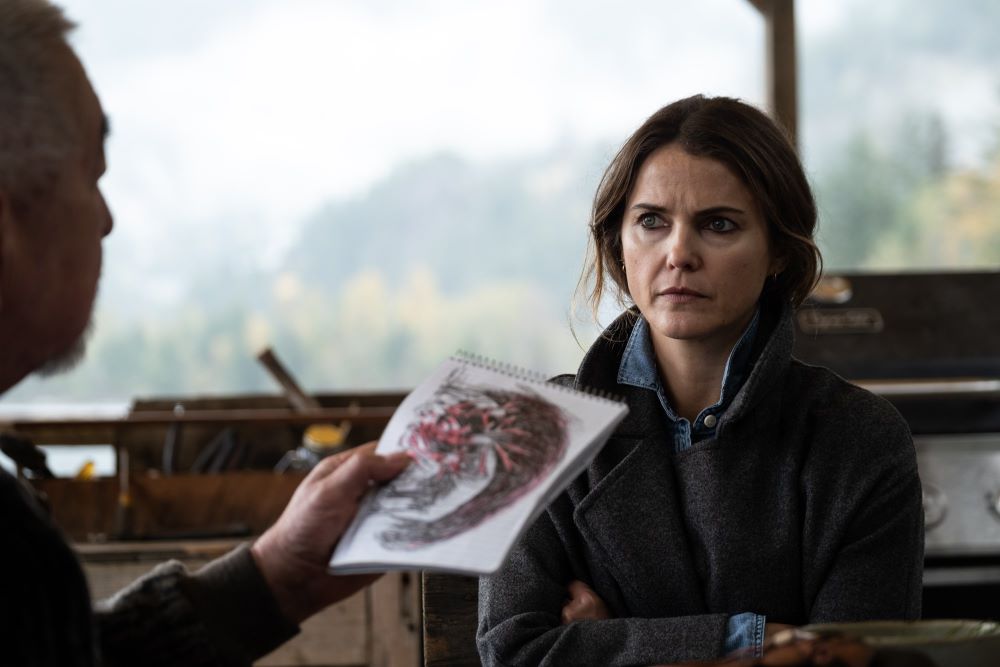 Barring a disaster in the next few days, the oft-delayed Antlers is finally poised to hit theatres. Scott Cooper’s film – which features a script from the director, Henry Chaisson, and Channel Zero creator Nick Antosca from his short story "The Quiet Boy," and a producer credit for horror maestro Guillermo del Toro – has been the victim of multiple delays, blowing through both April 2020 and February 2021 releases as part of Hollywood’s uncertain response to the pandemic. But not every COVID release can be The Empty Man, and Antlers joins the pile of horror titles whose best contributions to cinema are their trailers.

After two decades in California, Julia (Russell) has moved back to her hometown in rural Oregon. Alongside her brother Paul (Plemons) – the fading community's reluctant sheriff – Julia attempts to finally put her abusive childhood behind her, taking on work as a teacher at the local middle school. But when young and frail student Lucas (Thomas) begins to exhibit signs of domestic abuse, Julia inadvertently unearths the monstrous secret that the boy has been working hard to keep from the town.

With films like Out of the Furnace and Hostiles, Cooper has proven himself capable of exploring variations of the American frontier with an eye toward economic decline. On paper, Antlers is a continuation of those themes, a folkloric creature feature set in a dying mining town along the Oregon coast. The setting is everything for Cooper’s film; from the earliest scenes in the rundown mine to the overgrown paths between Lucas’ school and home, Cooper and director of photography Florian Hoffmeister craft the kind of wet, woodsy environment immediately recognizable to any Pacific Northwesterner.

For all the talent on display, it is Hoffmeister who might best be described as its secret weapon. The German cinematographer gained recognition for his work on the icebound first season of The Terror, and here he again layers much of the action behind a creeping mist. The result is an interplay of light and shadow that gives Antlers a sense of organic dread. When combined with the film’s dedication to practical effects – only Hannibal surpasses Antlers in terms of cadaver design – the production elements more than hold up their end of the bargain.

But what Antlers offers in production, it lacks – and then some – in storytelling. There will be those who raise the question of appropriation of Indigenous culture; consider the minor role of First Nations actor Graham Greene, whose brief appearance onscreen is dedicated to Explaining Things for the two leads. But by devoting so much screen time to the cultural power of mythology and the economic decline of its Oregon township, the trio of Antlers writers effectively cast a spotlight on their shortcomings. Not all horror needs to be allegorical in intent, but when you use culturally specific elements as your primary text, you owe your audience a resolution in kind. After all, a monster devoid of mythos is no monster at all.

Had the creative team kept to a more modest reach – removing all elements of Native American folklore and simply dropping a half-formed creature into our collective laps – Antlers might have transcended its flaws to become a B-movie masterclass in the genre. Instead, we are treated to a film with a vague understanding of arthouse horror and no capacity for subtext. Time may ultimately be kind to Cooper’s first foray into the horror genre, but the present holds nothing but darkness.