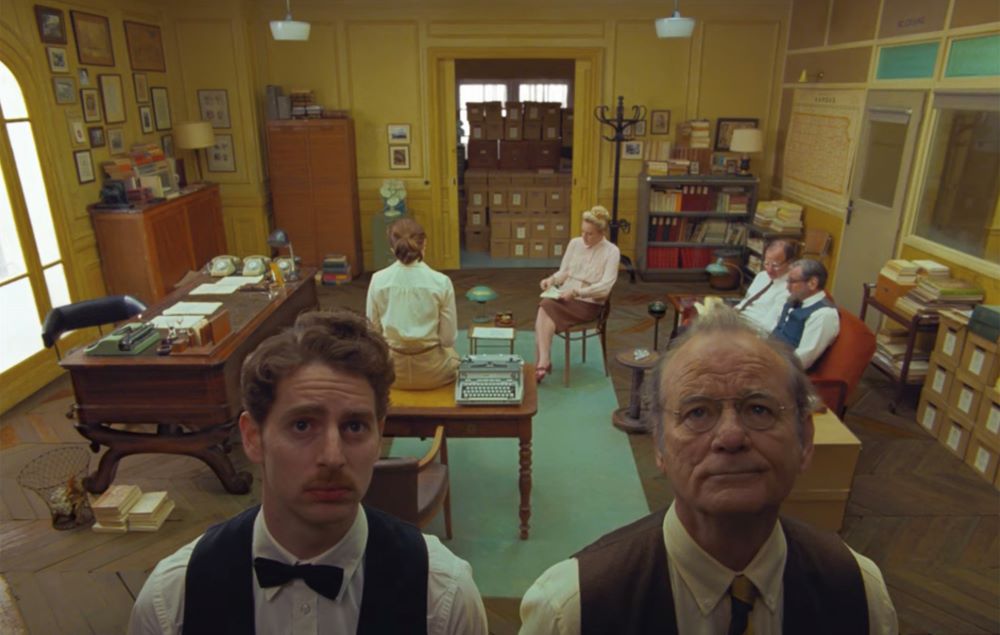 After languishing in quarantine for more than a year, Wes Anderson’s The French Dispatch is at long last in wide circulation. An anthology film of five segments, it is an indulgent celebration of that venerable weekly magazine whose collective bylines helped shape the cultural preoccupations of the last century, not to mention informing much of Anderson’s work. I speak, of course, of The New Yorker, which, along with The Paris Review et al., gave a platform to the emerging voices of modernism. And while there is no shortage of giddy eye candy in this assortment of confections, once the spell wears off, the exquisitely crafted spun sugar melts down to a lot of empty calories.

Perhaps it’s the nature of anthologies; sustaining consistency is a difficult task. There is a rhythm to maintain, a throughline to consider, darlings to kill. An editor, say, to bring it all together. Someone like Arthur Howitzer Jr. (Murray), who left Kansas for France after World War I, relocating to the fictional town of Ennui-sur-Blasé to establish the film’s eponymous weekly periodical. We begin with his obituary, a brief and loving tribute to a kind and endearing man who nurtured his writers as he nimbly gave his considerate notes (the perfect editor, no?). Howitzer’s death has warranted a special issue of the Dispatch, so the implacable staff set about compiling it. Following a quick tour of Ennui provided by perhaps my favorite character name in an Anderson film, Herbsaint Sazerac (Wilson), we are presented with the three articles chosen for the memorial. There is an artist profile of Moses Rosenthaler (Del Toro), an incarcerated painter who, along with his muse Simone (Seydoux) and greedy art dealer Cadazio (Brody), jump start abstract expressionism (or, more specifically, the French Splatter-school Action-group). “Revisions to a Manifesto” is a clever send-up of the May '68 student uprising, the flashpoint here being the boys’ access to the girls’ dormitory. Led by revolutionary Zeffirelli (Chalamet) and a bit too abetted by reporter Lucinda Krementz (McDormand), the demonstrations reach their zenith in a tense chess match, but not before gently skewering both the “reactionary neoliberal society” and the “touchy narcissism” of the youth movement. Rounding out the issue is a story by food and social critic Roebuck Wright (Wright), recounting a lavish dinner at a police commissioner's table that is interrupted by a kidnapping and subsequent heroic rescue.

Watching The French Dispatch, I was often reminded of a series of stories from my childhood by Hans Jürgen Press. They involved a group of children named the Black Hand Gang solving mysteries, as children do. Every page of the book was accompanied by an illustration, which held a clue to continuing the story. And that’s what nearly every frame of this film feels like. There is just so much to process at any given moment. From action scenes rendered in still-life tableaux, chaos frozen with the exquisite care of a renaissance composition, to Hergé animation sequences bursting with movement. And that’s on top of the director’s usual meticulously executed blink-and-you-miss-it flourishes. It can be quite intoxicating at times, but what so often saves Anderson’s formalist obsessions from feeling like you're mainlining a flipbook of Getty images from the last 80 years, are the performances. His cadre of actors regularly breathe the much needed life and pathos into what otherwise is a removed collection of composites with a list of idiosyncrasies. But save for Wright, and perhaps Del Toro, the distance is rarely breached, the archness lacks the heart. They’re all just another object to quickly admire in this ultimately exhausting film.