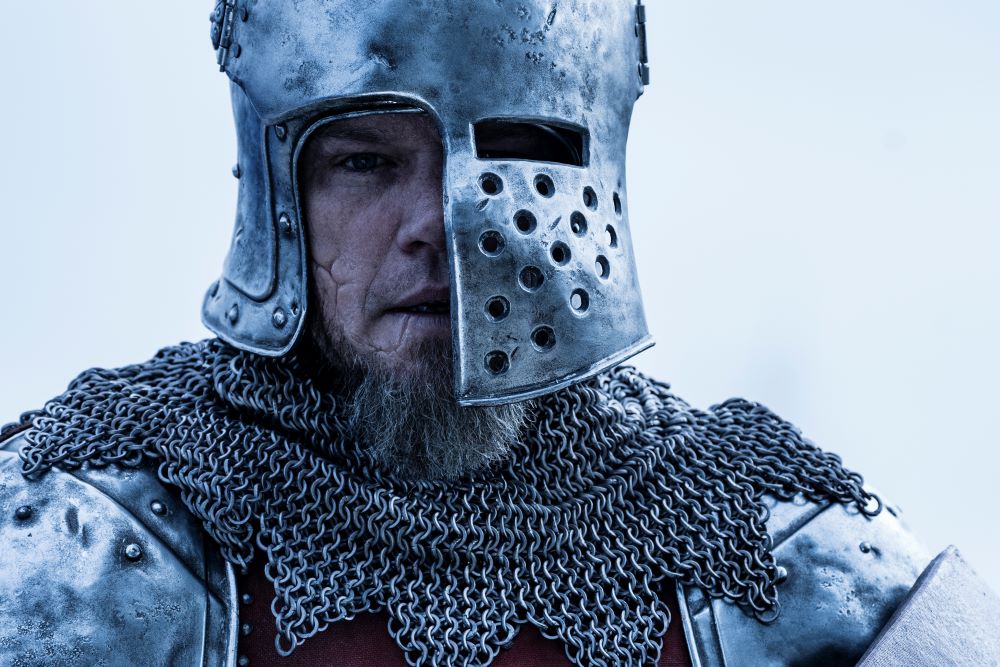 At the tender age of 83, Ridley Scott remains a force to be reckoned with. From his voyages into space to his big-budget period thrillers, Scott continues to step outside the comforts of his own franchises for new stories well-suited to his brand of cinematic worldbuilding. His latest, The Last Duel, is a sprawling treatise on sexual violence and the powerful institutions that rewrite history in their favor.

As brothers-in-arms in 14th-century France, Jean de Carrouges (Damon) and Jacques Le Gris (Driver) seem destined to have successful careers in the king’s service. But as Le Gris finds himself favored by the aristocratic Count Pierre d’Alençon (Affleck) and de Carrouges’ mismanagement of his estate pushes him further into debt, tension begins to build between the two men. So when the latter’s young bride, Marguerite de Carrouges (Comer, Killing Eve), counsels her husband on how to mend this rift, it could represent a fresh start for both houses – that is, until Lady Marguerite accuses Le Gris of rape, resulting in a state-sanctioned duel to the death between the two soldiers.

Over the past decade, Scott and cinematographer Dariusz Wolski have produced an unlikely string of Hollywood blockbusters, varying in tone but unrelenting in their beauty. The Last Duel continues this fruitful partnership, re-creating grand medieval tableaux as context for a three-person power struggle. Scott continues to do more in montage – quick-fire sequences of de Carrouges in battle – than most filmmakers would bother with in their biggest set pieces. The scope of these visuals provides an essential framework for the film, communicating how the fraying relationship between two noblemen could become a point of notoriety across a continental empire.

By splitting the three acts between them, co-screenwriters Damon, Affleck, and Nicole Holofcener offer a well-rounded perspective on the absurd nature of nobility. The Last Duel pokes its sword at a host of injustices, from the for-profit warfare that allows men like de Carrouges to prosper, to a corrupt legal system still held hostage by the power of religion. But the film is particularly ambitious in its gendered storytelling – the interlocking nature of the flashbacks calls attention not only to the points of disagreement but to areas of omission as well. Only Marguerite’s flashback exposes the horrors of the royal inquiry; the brash mythmaking of the first two acts depends entirely on Holofcener’s keen eye for the shadows of history.

And as is so often the case in A-lister cinema, each actor also lends their real-life celebrity to their character. It is hard not to see a little of the real-life Damon in Jean de Carrouges, a craftsman whose unforced conversational errors impact his standing at court, or to appreciate Affleck playing yet another miserable Lothario onscreen. These little sprinklings of metatextuality serve as a bridge between periods, allowing The Last Duel to feel contemporary without coming across as ahistorical. And rather than get lost between three big performances, Comer proves her small-screen success was no fluke, offering perhaps the most naturalistic and impactful performance in the final film.

Ultimately, if this film represents Scott making amends for the theatrical release of Kingdom of Heaven – an uncompromising period epic where sexism, politics, and proto-capitalism combine to soak medieval battlefields in blood — then it appears the universe has righted itself. The Last Duel is a thematic gold mine, one that sits nicely alongside some of Scott’s best work to date.