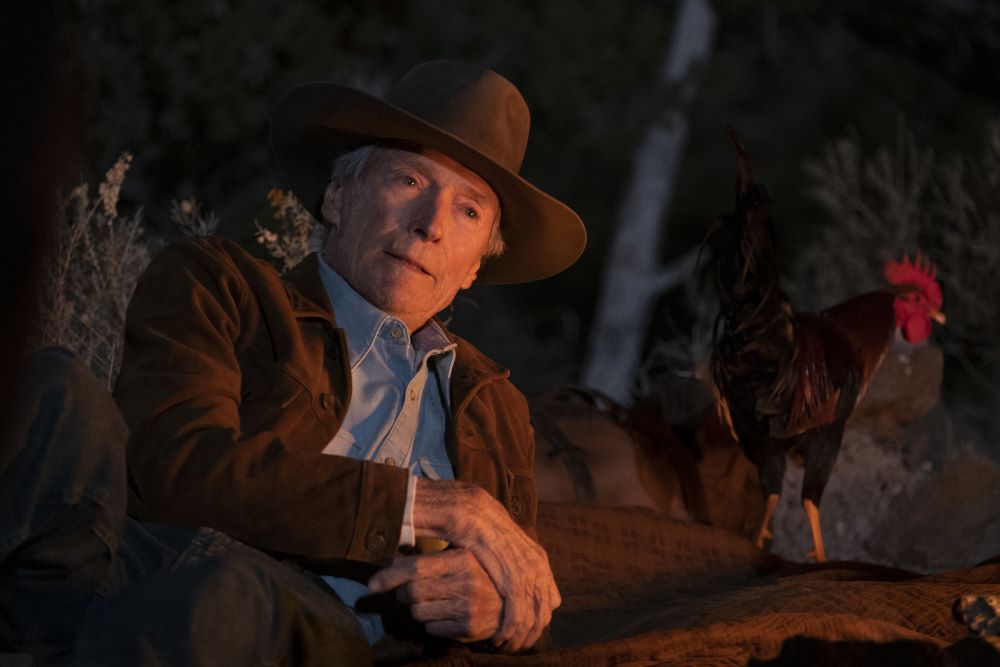 Nonagenarian actor/director Clint Eastwood rides off a little further into the sunset in this contemporary Western based on a Seventies-era screenplay by N. Richard Nash that was kicked around for decades, with everyone from Burt Lancaster to Roy Scheider to Arnold Schwarzenegger(!) attached to star in the role of its broken-down cowboy, Mike Milo. (Eastwood declined an offer to play Milo in 1988, opting instead to make moviegoers’ day once again as Detective Callahan in The Dead Pool, the last film in the Dirty Harry franchise.) At the impressive age of 91, Eastwood shows little signs of slowing down here, both before and behind the camera, though (without being ageist) he’s about 20 years too old for the part, and the film – essentially a hybrid buddy flick/road movie with an old coot (Eastwood), a troubled teenager (Minett), and a red rooster named “Macho” (uncredited; and yes, there’s a cock joke) – poses few directorial challenges, particularly in its thematic examination of the meaning of manhood.

Freshened up by frequent Eastwood collaborator Nick Schenk (The Mule), the script crams its protagonist’s backstory of bronc-riding glory, horse-racing success, and subsequent dissipation into the film’s first few minutes. First, there’s awkward expository dialogue given to Milo’s put-upon boss, Howard Polk (Yoakam), who makes passing references to an accident, pills, and booze before unceremoniously firing his unreliable employee from his horse-training job. That exchange is followed by a slow pan of framed photos and newspaper stories chronicling Milo’s early rodeo career, capped off by a grainy film clip of the fateful fall from a bucking mustang that ended his days in the competitive arena. Once Milo’s life history is unconvincingly condensed in this prologue (there’s one important revelation later in the film), in the somewhat puzzling next scene set a year or so later he begrudgingly agrees to drive down to Mexico and rescue (read: kidnap) Polk’s 13-year-old estranged son, Rafael aka Rafo, from an abusive ex-wife, a wealthy alcoholic with a predictably strong libido and hot temper.

Most of the movie is devoted to Milo and Rafo’s intermittent journey back to Texas, accompanied by their feathered sidekick, and the eventual bond that develops between them as the old man becomes the father figure the younger man has never known. But if you somehow overlook this burgeoning relationship, don’t worry: Almost everything is spelled out in Cry Macho, as if the narrative lacked the ability to speak for itself. With Eastwood uttering lines like, “You’re starting to grow on me, kid,” and, “This macho thing is overrated,” the movie plays more like an afterschool special crafted for adolescents than a provocative work tailored for adults, such as Eastwood’s far superior take on toxic masculinity in his subtly subversive 2008 film, Gran Torino (also scripted by Schenk).

Still, for all its faults, catch the occasional glimpse of a squinting Eastwood in a Stetson, his cheekbones still sharp and Adam’s apple ever protruding, and you can visualize the youthfully handsome cowhand Rowdy Yates, rounding up steers to the crack of that whip on the black-and-white television series Rawhide, as well as every other Westerner the actor has iconically embodied thereafter. It’s a bittersweet sight for those who have watched this man evolve from humble beginnings to achieve his place in American cinema’s pantheon. Regardless of whether Cry Macho merits a rating of good, bad, or ugly, Eastwood’s mere presence, despite any perceived physical frailties, can’t help but dwarf this slenderest of movies.