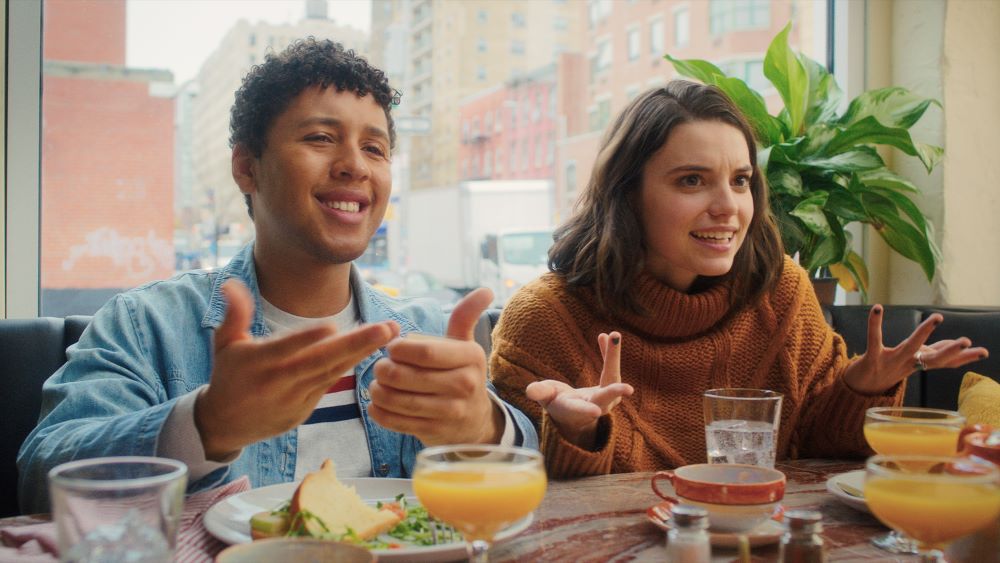 The ubiquitous smartphone deserves top billing in this callow rom-com about two right-swiping Manhattan millennials who meet cute on a dating app and contractually agree to a sexual relationship without emotional attachment to avoid the slings and arrows of big-city singlehood. Their written compact forbids any PDA and the utterance of those “three little words” (with noninvasive exceptions), and also includes negotiated terms about the frequency of sleepovers and parameters around cuddling. But it’s a friends-with-benefits arrangement doomed from the start: The smitten Milo (Young-White) believes love will ultimately prevail, while the pragmatic yet secretly starry-eyed Wendy (Reale) is determined not to commit. Didn’t anyone learn anything from that movie with Justin Timberlake and Mila Kunis, released 10 years ago, about the folly of platonic screwing?

Told as an urban fairy tale set in “a city that never sleeps, but sleeps around a lot” (pity poor Jerry Ferrara, the veteran in the mostly under-30 cast, as the movie’s narrator), Dating & New York adapts the traditional three-act structure for most screen romances – initial euphoria, followed by inevitable conflict, then blissful reconciliation – to its unconventional no-strings friendship. One of the film’s highlights is a cleverly edited sequence of parallel meta-conversations on this topic between Milo and Wendy and their respective BFFs, Hank and Jessie, who are, coincidentally enough, also seeing each other, but on a more conventional basis. But first-time feature film director and screenwriter Jonah Feingold has little idea how to tailor a narrative arc that emotionally mines the predictable heartache you foresee happening in the movie’s first 15 minutes. The setup is hard to swallow and the middle is mushy (without irony, Milo likens his post-breakup mental state to a “cracked iPhone screen”), flaccidly leading to a literal last-minute reunion precipitated by a montage of way-we-were memories lighting the corners of the estranged couple’s minds. Is this supposed to be a happily-ever-after ending? (The movie’s punchline response to that question will floor you.) Honestly, both Sex and the City and Seinfeld tackled the romantic pitfalls of youngish single life in NYC more adeptly in their relatively truncated formats than this 91-minute movie, and with a helluva lot more verve and wit.

The gap between Gen Y-ers weaned on text messaging and Instagram posts and everyone else (“OK, boomer”) may delineate which trespasses you’re willing to forgive here, depending on your birth year. For instance, Milo and Wendy frequently engage in what passes for conversation, but the two incessantly talk and talk and talk at each other, and rarely ever to each other. Maybe all that scrolling and emoji shopping has left little time to practice the art of romantic bantering. And for a scenario fundamentally predicated on the prospect of sex, why do we never witness even the slightest suggestion of them actually shagging? This movie is loaded with potential new entries in the Urban Dictionary – “rollover feelings” and “blowing a cartridge” come to mind – so there must be a catchy phrase in that online tome to describe these seemingly chaste F-buddies. Or maybe a meme or GIF that captures the concept. There just has to be something on that smartphone that can speak for me here.