Negative space scares artists. The instinct is to fill gaps with something, anything, even if it's just a vista of roiling clouds or big waves. It's often the same in film, where a director will just have random extras shuffling around, even if they're background blurs. To give a film true nothingness is daring, but it's what ghost story The Night House depends upon.

That space is exemplified in the way that Beth (Hall) strokes the empty sheets in the bed next to her. It's a way to placate the void of grief into which she has fallen in the wake of the sudden and shocking death of her husband, Owen (Jonigkeit). There's no consolation, much as her best friend, Claire (Goldberg, The Hummingbird Project, Barry), may try to distract her with sleepovers and bar nights. Instead, she's transfixed by the need to fill that Owen-shaped space – one she soon finds she never quite understood before – as she drifts through the house he built for them, drinking his brandy, looking through his phone.

Bleeding out from the pens of Ben Collins and Luke Piotrowski (the duo behind nightmarish school shooting drama Super Dark Times), the script is given bleak focus by director David Bruckner (The Signal, V/H/S, and innovative creature feature The Ritual). And focus is the key word. Bruckner doesn't just depend on Hall's performance but meets it with a mesmerizing visual style that doesn't just leave foreboding voids around her. Instead, it's an active use of empty space, constructing absences that have their own meaning – sometimes overt, sometimes more subtle, always demanding that the viewer pay attention to the whole image. This is magic eye filmmaking: Once you see the thing that is hidden in what seems like static, you're always aware of it, and the foreboding it implies. Yet it's actually supervising sound mixer Ric Schnupp (Midsommar, Bone Tomahawk) who sets that tone, with an opening conversation caught from the wrong side of a door, muted and hushed. Those murmurs and half-noises continue, as the negative spaces in the frame gain more and more form, and every answer Beth gets about Owen scatters more disturbing clues about what's really in those lacunas in her life. This is don't-blink, pin-drop cinema, where just paying attention delivers true scares.

That energy placed into making the audience look and listen out to the edges of the film makes Beth's central placement even more vital and enthralling; and by moving to The Night House, Hall is finally given the space that every previous performance has shown she deserves. She personifies the chaos of extreme grief, the rainbow of emotions from black to slate grays to steely, misty grays. It's her need – for closure, for reasons, for her lost husband – that truly fills those blank spaces, and makes The Night House so complicated, captivating, and chilling. 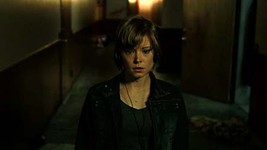 The Signal
The Signal is an audacious horror film that nonetheless veers on occasion into surreal black comedy.