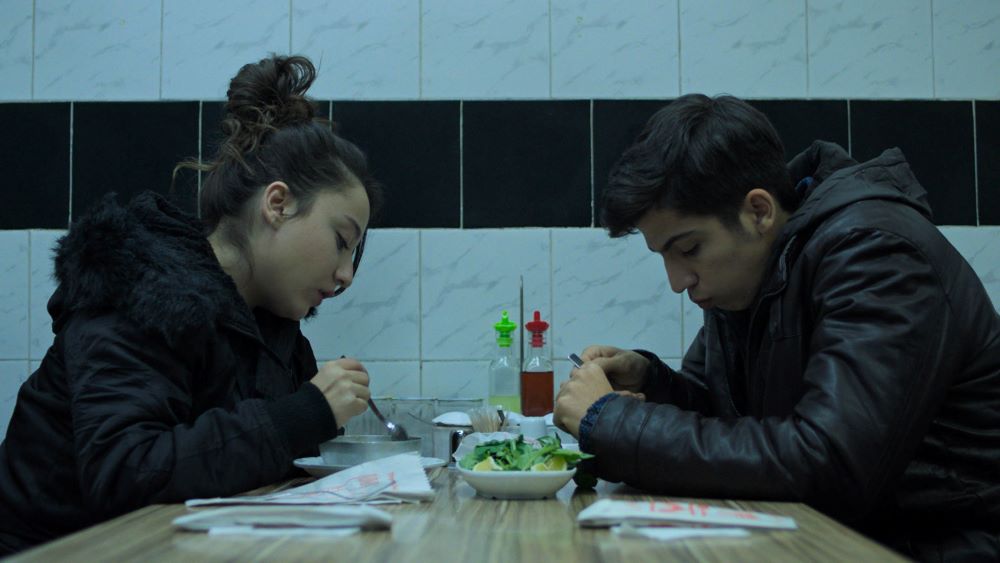 With their tight running times and limited scopes, short films tend to elicit equally succinct responses. Think: hmmm, ha, three variations on a huh (period, question mark, exclamation point). So it goes for the seven short films collected in this traveling show culled from six dozen shorts that screened at the 2021 Sundance Film Festival in January. Representing domestic and international films of fiction, documentary, and animated stripes, there’s not a dud in the bunch.

The program opens strong with “BJ's Mobile Gift Shop,” written and directed by Jason Park, about an entrepreneur redefining the American Dream. Some of the supporting players whiff of amateurishness, but the short is anchored by an all-swag, no-filler lead performance by Johnnyboy Tellem.

Canadian filmmaker Kelly Fyffe-Marshall’s “Black Bodies” – inspired in part by her own experience with racial profiling while visiting America – is the shortest selection of the program. With a black box theatrelike setting and figurative depiction of violence inflicted on Black people, the short has an intentional staginess, and its brevity maximizes the impact of poet/performer (and co-writer) Komi Olaf’s spoken word lament.

“Kkum,” the sole animated outing, is South Korean filmmaker Kangmin Kim’s black-and-white exploration of his mother’s premonitory dreams – trippy and tender, at once out-of-this-world visually and resonant emotionally on a very human scale.

While there’s no intentional thematic link between these disparate films, mothers are ever-present. In director Natalie Chao’s intimate, essayistic “To Know Her,” she reflects on a dead parent and interrogates a still living one. Amidst the archival footage (of shaky-cam Nineties vintage), we catch reflections of her mother in mirrors, revealing her as the one holding the camcorder, a kind of cosmic string attaching her to the daughter who would grow up to be a filmmaker.

Mothers play ancillary roles in the remaining shorts. J. Smith Cameron (Succession) brings chaotic energy to Melody C. Roscher’s “White Wedding,” which could have used more screen time to explore its combustible setup of a biracial bride confronting her absent father on the big day. Another mother just gets the plot rolling in the terrific “Wiggle Room,” written and directed by Sam Guest and Julia Baylis. Starring Deanna Gibson as a woman in a wheelchair and Sam Stillman as the claim-denying insurance agent she goes to war with, the short nabbed a Special Jury Award for Acting and boasts a chef’s-kiss final twist. And in program capper “Les Criminels,” a French-Romanian-Turkish co-production, two teens trying to get amorous have to dodge calls from an anxious mom and outfox some extremely creepy motel owners. Comic and terrifying in equal measure, this accomplished short from writer/director Serhat Karaaslan, who – no surprise there – already has a feature film under his belt, provides a satisfying cap to a program of steady quality, well-plotted and paced.