“I wish I had dog brains half the time,” aging slacker Leif (the inimitable and always charming Johnson) tells his black lab Nora on the way to his dead mother’s cabin. “It’d make life easier.”

But isn’t that “man’s best friend” vibe already part of Johnson’s appeal? That shaggy affability makes the newly orphaned Leif not so much of a stretch for him. In light and introspective comedy Ride the Eagle, he’s disturbed from his life of bongo-playing stonerdom by the news that his late estranged mother (Sarandon as an aging free-spirit type, a less caustic version of what Helen Hunt is pulling off in Blindspotting) has left him her cabin. And it’s a nice cabin: not like the the log retreat in a friend’s backyard that he lives in, but a gorgeously crafted retreat nestled in the sumptuously shot Yosemite forest that would make any wannabe pioneer yearn for the great outdoors. Nice enough that he’s prepared to move at least a little past the years of distance and tackle the list of tasks he has to fulfill before he can take ownership.

These aren’t herculean labors, but more delicate life lessons in a quiet classroom, via a posthumously delivered VHS tape, which is where Johnson excels. His pitch-perfect expressiveness and soulful undercurrent translate what could have been a maudlin meditation on grief into something more touching and sweet. All things must pass, Ride the Eagle proposes, in a story where saying sorry can sometimes be as good as making amends, especially when amends are impossible. Or rather, self-forgiveness, as Mommy Weirdest’s challenges send Johnson on a rambling path that intersects with an always-game Simmons as a mysterious interloper and Carden as an ex that may have been the one that got away.

It may be about little more than a guy getting his head a little more straight than he thought it was and burying a few resentments that he didn’t even know were sticking up, but Ride the Eagle knows that a small, sad, personal story doesn’t have to be a tragedy. If it was a trail, it would be marked on the map as “intermediate,” but the view at the end is definitely worth the walk. 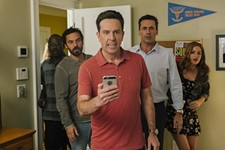 The Mummy
Tom Cruise does the monster mash