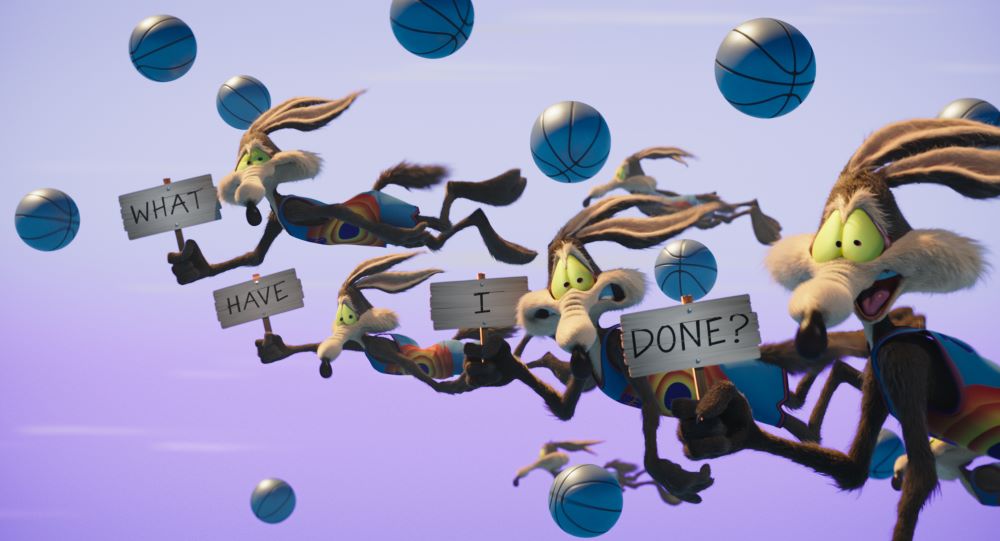 The legacy of 1996’s Space Jam is one that’s been artificially manufactured by studio interests cashing in on pop culture branding. In the beginning, it was by way of giving popular Nike ads starring basketball legend Michael Jordan and the Looney Tunes gang the feature-length film treatment. Nowadays, reverence for the film is kept alive through nostalgic pandering via graphic tees you can buy at Target. A film widely recognized as a terrible marketing exercise is kept alive today through regurgitation of it being a "fun movie" from the "good ol’ days" of the 1990s.

At the very least, watching Space Jam today promises a viewing experience somewhat genuinely weird in its execution, with an agreeable sheen of Nineties cheese, and that actually does posit itself as a Looney Tunes movie. The same cannot be said for the 25-years-late sequel Space Jam: A New Legacy, a movie so insufferably studio-manufactured that anything potentially resembling entertainment is rendered boring, obvious, and exhausting.

Doubling down on the now-franchise’s cynical conception, A New Legacy is plotted to include as many Warner Bros. IPs as possible onscreen. LeBron James takes over leading man duties here, playing himself as he and his son Dom (Joe) inadvertently end up inside the WB “Server-Verse” and at the whim of an aggrieved algorithm system, Al G. Rhythm (Cheadle), who’s taken Dom captive. Wouldn’t you know it, James is challenged to a basketball game and joins forces with Bugs Bunny and crew as they traverse the WB servers and visit the characters from all your favorite franchises.

The entire ethos of the movie is designed around this idea: that an entire rich history of filmic iconography is readily accessible to be exhibited. You, as the audience member, are expected to shake with giddiness at the opportunity to point out which ones you recognize. What is the purpose of this other than being a purely masturbatory parade of a studio’s greatest hits? Any semblance of plot or characterizations are pushed aside for character cameos devoid of context and rendered into nothingness. Are we as audience members meant to be excited to see that Alex and his psychotic, sexually assaulting band of droogs from A Clockwork Orange made it to the big game? Everything is stripped of meaning because it doesn’t need to mean anything. It only needs to exist, so your monkey brain can point and name it off. This is how lowly the film thinks of its audience.

Not to mention that the movie looks like shit. Given most of the movie is set in a computer, many of the environments are entirely CG and brutal to the eye. The refreshing sections that harken back to the traditional 2D animation style of the original 'toons are all too fleeting, and it isn’t long before the classic characters are transformed into bland CG simulacra for the climactic showdown. The performances have trouble selling the material as well, with James just as wooden in his delivery as Jordan was back in the day (but they make a meta joke about it so don’t worry, they know it sucks!). Thank god for Cheadle, an actor with actual screen presence who’s having fun in a role for a film that doesn’t deserve his magnetism.

But one performance can’t save a project that’s dug itself that deep a hole. Space Jam: A New Legacy is nothing more than yet another indictment of the horrid current state of affairs that is franchise filmmaking. Everything is a reference, everything is meta, and everything is connected to something else you saw one time. By halftime of this two hour piece of dreck, you’ll wonder why you weren’t more appreciative that the first one only wasted 80 minutes of your life.