Assassins killing the wrong target invoke the wrath of the police. Assassins killing the right target invoke the wrath of the mob. The second of these truisms pulls the trigger on two-gun action flick Gunpowder Milkshake, as killer-with-almost-no-conscience Sam (Gillan) gets into all kinds of turmoil when she puts a slug in the head of the son of gang lord Jim McAlester (a sadly underutilized Ineson). Dressed like Carmen Sandiego on her way to a funeral, she was only doing what she has been ordered to do by her handlers, but McAlester isn't the kind of man to be placated by such excuses, and so she has to go on the lam. Unfortunately, she ends up with a precocious and recently orphaned youngster (Coleman) to accompany her escape and her own maternal abandonment issues, having been dumped by shooter-for-hire Scarlet (Headey) 15 years earlier in a 1950s-style aluminum-sided diner that serves as a safe haven for every gunsel in the game.

"Slick and stylish action-comedy" is a change of style for writer/director Navot Papushado, who turned heads in 2011 with Israel's first horror film, the scathing Rabies, and then gave a grisly, cerebral spin to modern noir with crime drama Big Bad Wolves. Both were collaborations with Aharon Keshales, and while their long-promised Once Upon a Time in Palestine keeps gestating, he and Palestine's third writer, Ehud Lavski, have penned a sly homage to the Poliziotteschi, the hyper-violent and wildly amoral Italian crime dramas of the 1960s, and channeled it through the lens of bone-crunching Korean revenge dramas. A cool killer protagonist, ranks of sleazy heavies with slicked-back hair, rooms full of gray old men in dark suits glowering, treachery, bullets, rib-cracking and jaw-breaking punches, the whole nine yards. The score from Haim Frank Ilfman definitely even channels Poliziotteschi favorite composer Franco Micalizzi, but there's a more humorous element there too, deliberately referencing his cowboy comedy Trinity in places.

Gillan's heavy hitter holds everything together, with a combat style that depends on ingenuity rather than being the fastest or strongest. Her sardonic exasperation hides a heart of tarnished gold and catches a character who has burned out the flight side of her survival instincts, and leans quickly on the fight aspects. Yet there's a feeling we've seen everything else before, in quirky violent comedy-dramas like Smokin' Aces and, more recently, Hotel Artemis – or, even still in cinemas, Bob Odenkirk's John Wick-a-like Nobody. There's nothing wrong with this kind of big, silly entertainment, as summed up by Giamatti as the Firm's accountant: He's having the same (if more restrained) level of fun he had in the equally overblown Shoot 'Em Up.

Yet an idiosyncratic and self-referential world of gunplay and goons, running gags like not swearing around the children, plentiful needle drops, and a series of well-engineered set-pieces should add up to a lot more, especially when delivered with such panache. As much as Gillan, Headey, and the three Librarians (Bassett, Gugino, and Yeoh) of the gunplay apocalypse embrace the visual stylization and harshly annunciated dialogue, Gunpower Milkshake is immemorable. Like a decent milkshake, it's fine while you're consuming it, but chances are you won't remember it after the last slurp.

In cinemas and on Netflix now. 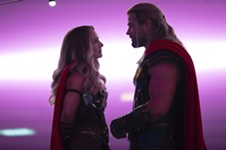