Fairly quickly, you sense something crucial is missing from this hyperactive sequel to 2017’s equally frantic The Boss Baby, the sine qua non that elevated the original animated movie (for all its faults) above the other noisy kid flicks of the day. But as your senses are bombarded by yet another fantastic tale anchored by a talking infant attired in business coat and tie, the key to solving the mystery remains elusive until it hits you what’s aurally absent in all of this candy-colored pandemonium. It’s Baldwin’s delectable vocalization of autocratic rugrat Theodore “Ted” Templeton. His raspy intonation of smug superiority in the first film was near-genius, smartly literalizing infantile grown-up behavior in an otherwise dumbed-down movie.

In this second installment, Baldwin voices both the upsized and downsized incarnations of Ted, now an overworked hedge fund executive toiling in today’s corporate world, but that imperious growl is rarely heard. Maybe it’s an artistic choice, given the character’s maturation into a barrel-chested, handsome young man resembling Mr. Incredible (but with a less pronounced forehead and chin), or the gender shift to a new female boss baby in this slightly more woke follow-up. Perhaps it’s partially attributable to the actor’s aging vocal cords. Whatever the reason, the pleasures of witnessing a miniaturized bigwig in full-on CEO rant mode are largely denied here. It’s a like a version of 30 Rock featuring a Jack Donaghy with only a smidgen of his smarmy charm.

The complicated, fast-and-furious narrative of Boss Baby: Family Business requires the rapt attention of child and adult viewer alike to even vaguely understand what the heck is going on. At the outset of this years-later sequel, you learn that Ted’s big brother, Tim Templeton (voiced by Marsden, replacing Tobey Maguire), is now a married, stay-at-home dad to two girls: the fiercely intelligent seven-year-old Tabitha and her little sister, the adorable infant Tina. After — spoiler alert! (as if that warning makes any difference) — baby Tina reveals she can talk and boss around her elders just like her Uncle Ted once did, she sends her father and younger brother, who’ve become estranged over the years, on a BabyCorp mission to infiltrate Tabitha’s innovational school, The Acorn Center, and unveil the sinister goings-on there. So that Tim and Ted may blend in with the rest of the student body, the two fraternal undercover agents are physically regressed for 48 hours to their ages in the original movie. And that’s only the beginning. To the extent the folks at Dreamworks Animation think they’ve made a movie teaching kids about the value of family, they’ve underestimated the onslaught of distractions constantly churning onscreen.

It’s overwhelming, but there are a few nice touches that aren’t completely lost in the bedlam. Goldblum’s familiar variable-speed vocalization of the duplicitous headmaster, Dr. Armstrong, fits in well here, while the occasional out-of-nowhere appearance of an ashen-skinned urchin with a magenta mop of hair and questionable mastery of the English language (a foreign exchange student from another planet, maybe?) is delightfully creepy. Likewise, the pet Shetland pony with a bulky body, stubby legs, and a side-mane of long blond Nordic hair who often keeps things moving at full gallop is good for a few laughs. And finally, who can completely begrudge any movie with a musical interlude that introduces kids to the timeless Cat Stevens song “Sing Out” from the cult film Harold and Maude? Sometimes, it’s the simple things that stand out. 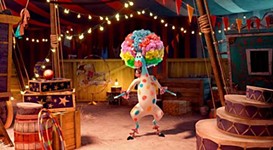