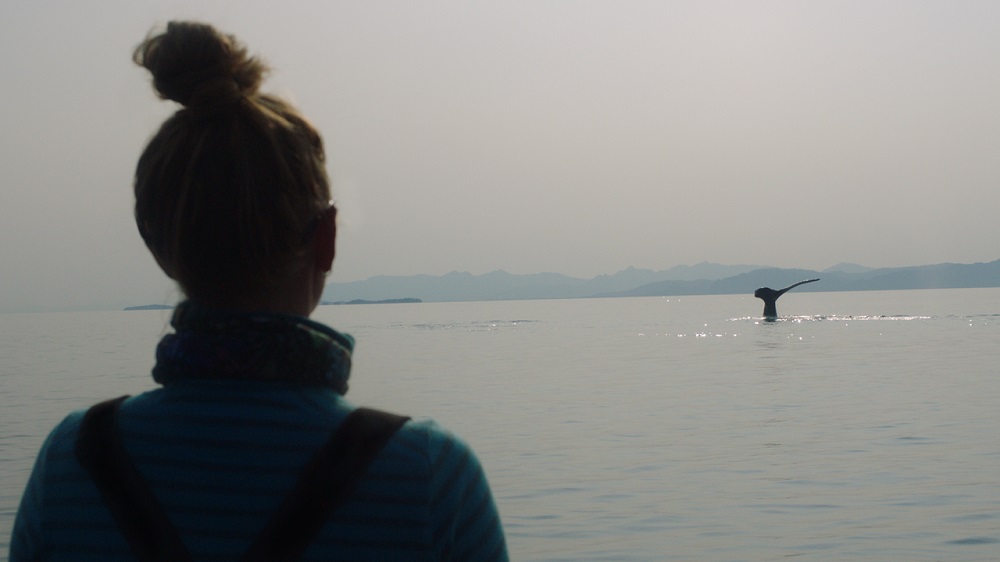 The whalesong of the humpback has an ethereal elegance that sounds like a transdimensional missive from the Blazing World. The meaning of these mysterious, atonal musical phrases is still unfolding, and is one of the concerns of this new doc from UT alum Drew Xanthopoulos (The Sensitives), which debuted at Tribeca Film Festival last week before launching on Apple TV+. The other concern is a cornerstone that is intimately familiar to anyone studying the various sciences: field research. The filmmaker shadows two cetologists (scientists of whalelore) as they strive to collect their data on these marine mammals whose complex communications are on a scale whose only analog is, well, us.

Dr. Michelle Fournet has come to Frederick Sound in Alaska to try to trick the whales into talking to her. Using equipment that broadcasts sound underwater, she repeatedly sends out a “whup call,” a sort of greeting. Initially, she and her crew attempt to follow a single whale, but this proves difficult, so she switches tactics to record responses from as many whales as possible. With her research time running out, she endures further complications when the motor on her boat fails, and she has to wait on a replacement, frustration sets in.

Across the globe, Dr. Ellen Garland is traveling to French Polynesia. She is tracking a specific whalesong as it travels east from Australia. The same song is shared among the whales across vast distances, and the migration sees the song change and evolve. Armed with recording devices, she and her crew chase down the whales, hoping to find one singing their tune.

Keeping the camera on Fournet and Garland may reduce the screentime of the actual humpbacks, but Xanthopoulos is more interested in the research process, the passion and devotion the two have for their work, and capturing not just the thrills and the agony, but also more contemplative moments of of reflection and motivation. As to the enigmatic whalesong, we are treated to kaleidoscopic visuals representing the sounds of the humpbacks, and the scientists’ interpretive methods are akin to those in films about communicating with aliens. But these aren’t creatures from another world, they are a species of the oldest culture from the ocean, whose sight and sound have evolved into one, leviathans with a language full of secrets and wonder.

Fathom arrives in theatres and on Apple TV+ on June 25. Read our interview with director Drew Xanthopoulos and producer Megan Gilbride at austinchronicle.com/screens.