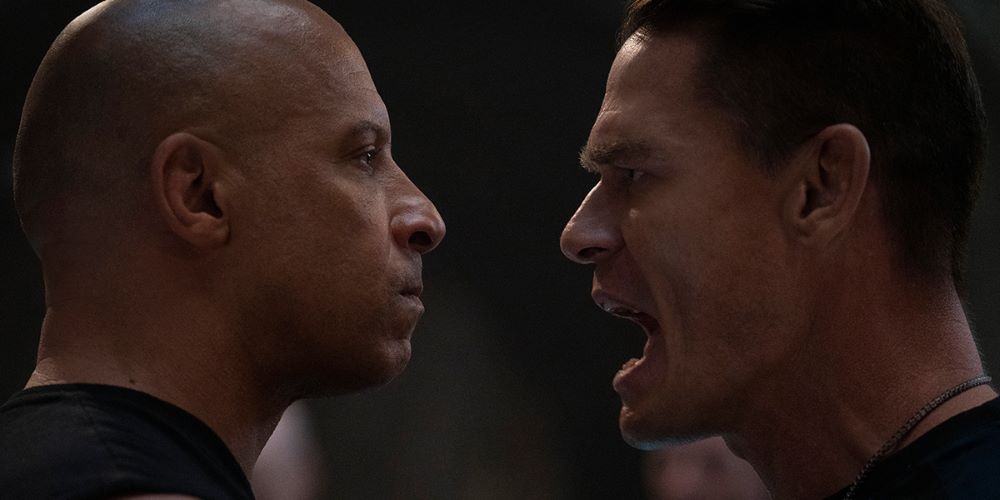 So there I was, all, like, What the efff?! Where the hell am I? How did my 88-inch Samsung QLED get so freaking huge? And why isn’t the screen its usual backdrop mirror image of my living room? Bill Hicks told me all those shrooms we took way back in the Eighties absolutely wouldn’t result in tragicomic flashbacks thirty years down the road. Dude you lied: The doors of perception are super-wicked ajar right about now. Then realization dawned, albeit slowly because the lighting was dim and shadowy figures murmured at least six feet from me in every direction and, y’know, maybe they had nunchucks, right? After 426 days – that’s 36,806,400 seconds on the odometer, you gearhead – I was back in a theatre, with other humans mostly maskless, anxiously waiting for my first true moviegoing experience in 14-plus months to kickstart my heart with the motley crew of Team Toretto. As far as riotously over-the-top, rip-roaring automotive mayhem and the sternum-shattering sound design of a modded-out, 6.2-liter, V-8-powered 1968 Dodge Charger Hellcat sporting a 426 Mopar Crate Hemi deathgasm engine goes, F9: The Fast Saga is a perfect example of why movie theatres are so necessary for films of this type. Maybe you can watch (pick any mumblecore indie outing) on your home theatre screen or even your smartphone and come away satisfied, but that’ll never be the case with the best Saturday afternoon popcorn genre films like Universal’s $6 billion dollar-grossing Fast and the Furious mega-franchise.

That said, F9 isn’t a very good piece of filmmaking, even in the context of the franchise. It's overstuffed with all the actors wasting both the viewers’ and the movie’s running time by actually speaking dialogue when we all know that what audiences really want to see is outrageous vehicular slamslaughter. (And explosions. BIG ones.) F9 delivers on all of that and more, tossing in everything from the proverbial kitchen sink to the International Space Station and more globe-hopping set pieces than your favorite 007 escapade. It’s big, dumb fun cobbled together with the series overarching emphasis on the importance of “family,” dammit. Need I even go into the plot? It’s painful to imagine what a newbie to the F&F omniverse might expect dare they enter the nine-film – plus television series, video games, Universal Studios Hollywood attraction, ad nauseam – via this particular, ahem vehicle.

Suffice it to say the Dominic Toretto’s (Diesel) United Colors of Benetton gang of shady greasemonkeys-turned-good guys (and dolls—series stalwart Rodriguez always looks like she’s having the time of her life, and both newcomer Sawai and the totally unknown neophyte Mirren prove far more interesting than their musclebound male counterparts) are chasing a MacGuffin that resembles nothing so much as one of Loki’s cast-off whatsits. Chaos, comedy, and multiple shocking reveals ensue. So, y’know, it’s a Fast and the Furious film but this time clunkier, minus much of the snappy gutter panache of 2001’s original.

There is one wholly original but unfulfilled tease in a sequence where Roman (Gibson) questions his compatriots about the fact that none of the core members of Toretto and Co. ever truly get hurt despite enduring two decades of hyper-stylized grievous bodily harm. “Seriously,” he asks, pointing at the bullet holes in his shirt, “we always walk away with barely a scratch.” Fast & Furious 10 is already on its way and Roman’s fair query feels like it came from somewhere in M. Night Shyamalan’s unbreakable wheelhouse, or maybe the MCU’s “super soldiers” story. Who knows? Team Toretto versus the Avengers? I’d pay to see that.