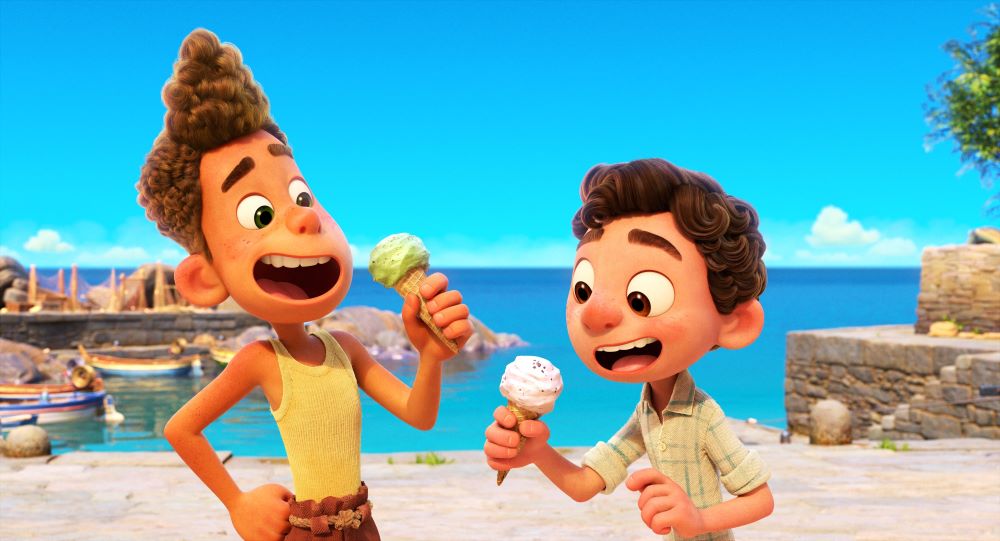 Selkie, kelpie, kappa, vodyanoy, merman: Folklore is swimming in mythological, often humanoid creatures who make their home in the water. Rich stuff, that – so how did Luca wind up such thin soup?

Throwback Italian pop, a cute throwaway Marcello Mastroianni gag, and lush seaside visuals – the closest most us will get to the Italian coast for the foreseeable future – mark some of the few, and fleeting pleasures of this latest Disney and Pixar animation, which continues a yearslong cooling streak for the studio. (I’d venture its last unqualified masterpiece was 2017’s Coco.) First-time feature director Enrico Casarosa takes a romantic lens on his native Italy, setting the film in the early Sixties, maybe the sexiest time and place in cinematic history. I don’t blame him, or the titular hero Luca (voiced by Jacob Tremblay), for going ga ga over an era-defining cherry-red Vespa. (It really is dreamy.) But before he can fall for that Vespa, first Luca must set foot on terra firma.

Luca is a tween-age sea monster. Save an amusing cameo from Sascha Baron Cohen as a bottom-sea-dweller, there’s nothing striking in the film’s conception of the water or its inhabitants – no special magic or menace. Luca’s family is cartoon-corny. Dad (Gaffigan) is a dim bulb; Mom (Rudolph), a helicopter parent; and Grandma (Martin) has a salty mouth. If Luca has ambitions or an inner life, we see little hint of it; there’s no “Part of Your World” equivalent to this underwater tale. A chance encounter brings Luca up to the surface, where his mother has always warned him danger awaits. Turns out, out of water, Luca the sea monster morphs into a human boy. Splash a little acqua on him and he reverts back to flippers and gills.

Another changeling, wild child Alberto (Grazer), is Luca’s guide to the human world, even if he knows little of it himself. They bond over music and a magazine ad opening their eyes to the existence of scooters. (An earnest query: At what point did the sea monster learn how to read?) Eventually the pair run away to a coastal town together and fall in with a local girl, make a mortal enemy, and sign up for a three-way race. It’s a lot, but also very little: The action amounts to multiple variations on “try not to get wet, or caught out” to push along a plot that dispenses the usual life lessons about being brave and valuing friendship. Interestingly, the locals are obsessed with murdering sea monsters – which is kind of dark! – and Luca and Alberto, trying to blend in with the locals, help a fisherman with a big catch. Another earnest query: Is that not a betrayal of their species? Is that not dark? That darkness is tantalizing – a toe dip into subversive waters – but the filmmakers remain stubbornly incurious.

The name of the town is Portorosso, and here Casarosa and screenwriters Jesse Andrews and Mike Jones are showing their hand. The name is an explicit nod to Hayao Miyazaki’s Porco Rosso, a dizzily imaginative adventure story about an Italian fighter pilot who is cursed to be a pig, which doesn’t really slow him down. It is, as they say, some real weird shit – also insanely fun. Gentle, don’t-make-any-waves Luca badly needs some of that real weird shit. How strange the filmmakers wear that influence on their sleeve but don’t trust the audience to be hip to the same.