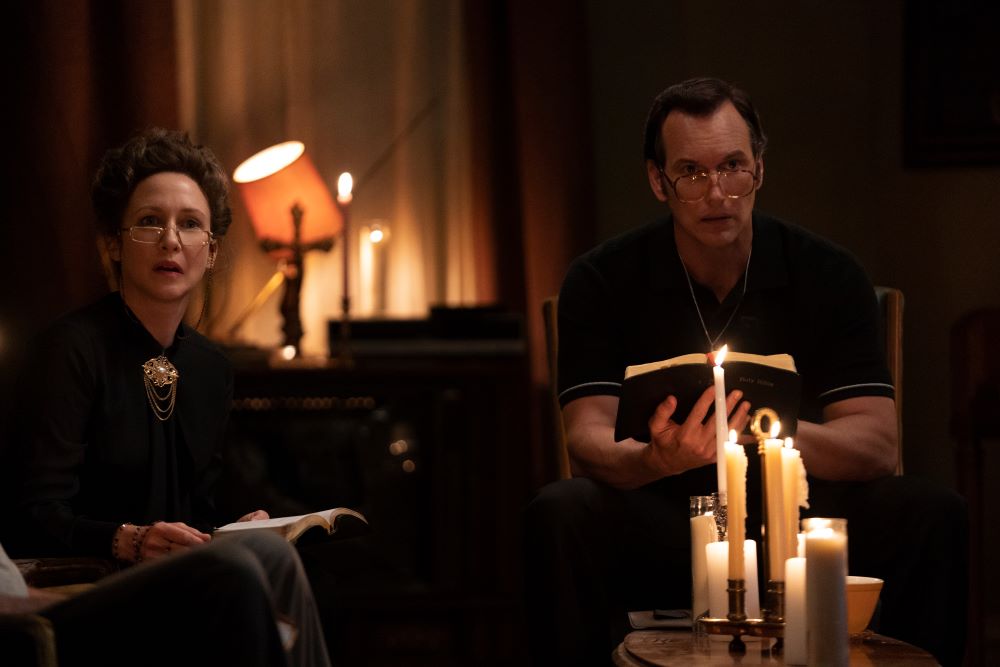 The Conjuring: The Devil Made Me Do It

Money is no issue for The Conjuring films. The series is one of the biggest, most convoluted studio IPs that doesn’t derive from comic books, and the core films of James Wan’s demonic Catholic cinematic universe are some of the most expensive looking horror films being made today. They’re wonderfully period accurate with beautiful touches, incredible camera rigging, and detailed costuming. Extravagant set pieces be damned, though – including a well-executed scene involving a luxurious waterbed – The Conjuring: The Devil Made Me Do It doesn’t live up to the bone-chilling focus, simplicity, and direction of Wan’s first film in this bloated eight-part series.

The Devil Made Me Do It director Michael Chaves replicates Wan’s flair the best he can, with sweeping wide shots of gorgeous houses and quiet, misleading spooky sequences that erect into clutch-your-pearls jump scares. There’s even a visual callback to the first film’s signature scare, an attempt to recreate the tension of Lili Taylor’s infamous basement clap game by stuffing Vera Farmiga, who plays medium Lorraine Warren, in a tiny crawlspace under the obligatory cursed family home. Chaves is a smooth copycat, much better at recreating Wan’s vision than the Annabelle and Nun spinoffs that swirl around the main series, to a point where it’s debatable as to how much of the directorial reigns Chaves held, and if The Devil Made Me Do It was even half as good as its genre neighbor, Poltergeist, this could be a film where people debated the truth behind the director credit for decades.

But to buy into The Devil Made Me Do It, Chaves, Wan, and co-writer David Leslie Johnson-McGoldrick ask you to buy into the innocence of a small-town upstanding gentleman, Arne (O’Connor), who couldn’t have possibly murdered the boss and landlord of his girlfriend, Debbie Glatzel (Hook). The series being based on the case files of the real-life Warrens, two notorious con artists who profited off desperate people, was never much of a distraction until this particular entry.

The Devil Made Me Do It showcases Ed Warren (Wilson) and wife Lorraine hopping around the judicial system, proving the existence of demons, and defeating skepticism in ways that Dana Scully and Fox Mulder could never. Set in the thick of the Satanic Panic, the Warrens sincere case of Arne’s innocence is disturbing, negligent, and even dangerous. The Devil Made Me Do It twists reality (in truth, the demon defense was not accepted in court), and plays it up as fact, something that’s not often an issue but in an age where conspiracy is increasingly running amok, this entry feels a bit more misguided.

The Devil Made Me Do It’s mystery is weighed down in explosive set pieces and grander acts of devotion, both religious and martial, which loses the focus of the (albeit dull) setup. An overlong climax that channels both The Exorcist and The Shining is tired by tropes, snapping back and forth between Arne’s battle against the evil forces that still possess him in jail and the Warrens' even grander battle against the Big Bad Occult-Obsessed Witch who is the baddie pulling the strings. There’s an explicit theme of “love conquers all,” as seen in both Debbie and Arne’s loyalty and the Warrens’ ongoing blistering passion. It’s a thread that clicks more in the preceding films, and one that is exhausted in this entry.

It’s disappointing to stop rooting for a blockbuster behemoth horror series, but The Conjuring movies’ quality and talon-tight hold has rapidly deflated over time. The films have lost sight of what made them grand, escapist, and celebrated, and burning the “based on true events” marquee to evoke sympathy in this particular case is disengaging.