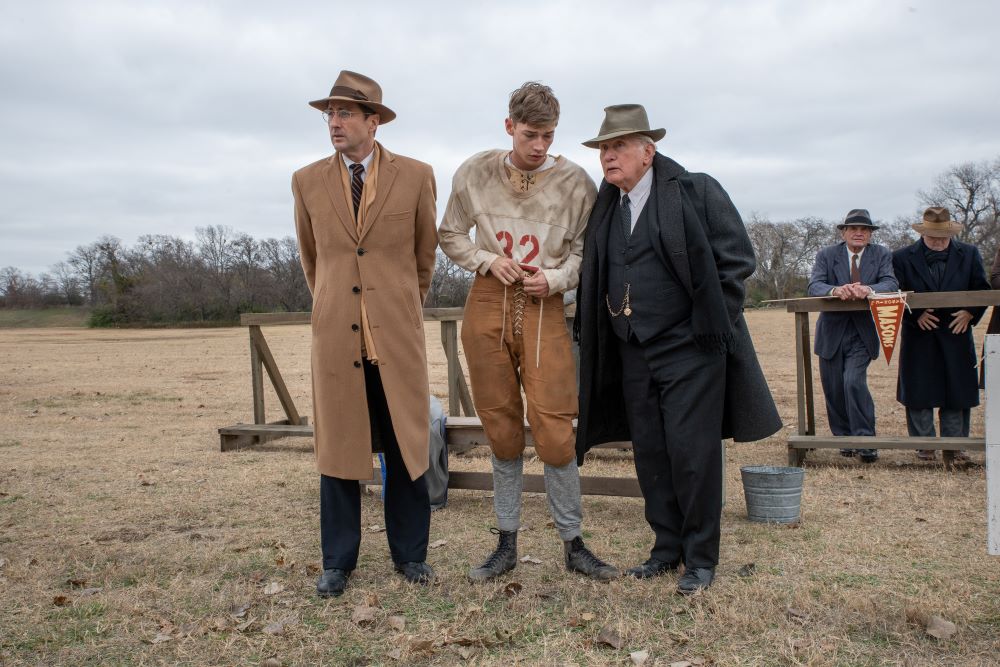 “Stay down in the dirt where you belong, loser orphan” is a line that it shouted on the football field in Ty Roberts’ Texas sports drama 12 Mighty Orphans. The film, that’s based on a true story, is either the best satire of all time, or one of the most generic and boring sports movies to have ever been made. In Roberts’ film, Luke Wilson plays Rusty Russell, a high school football coach who volunteers to get a ragtag team of orphans in shape to compete during the 1A season. With the help of Doc Hall (Sheen), Russell manages to create synergy on a small team of just 12 players, giving them a gift that could change their lives.

12 Might Orphans feels like it could be an SNL sketch about Oscars Bait. The film has it all – historical period piece roots, successful actors that feel too big for the film’s material, the thread of overcoming the odds, and, of course, the down-on-their-luck orphans. Hell, even Rusty is revealed to be an orphan, one who was almost blinded during World War I. The tragedy keeps piling on as Wayne Knight’s character, Frank Wynn (a teacher who relies on a paddle for punishment), becomes increasingly sinister and actively tries to ruin the team’s chances of making it to the state football championship.

Sheen is seemingly having the time of his life, decorated in many phenomenal hats and cracking cheeky quips as he casually downs the liquor from his flask. He’s also tasked with the unforgiving job of voiceover narration, sprinkled throughout the film over archival pictures and clips, which abruptly kills any sort of momentum 12 Mighty Orphans drums up. The VO is reminiscent of a cheap TV documentary, and Sheen’s voice is neither warm nor inviting. It’s an addition that unnecessarily reminds the viewer about the film’s historical accuracy, a plea to take the film seriously.

As serious as it tries, 12 Mighty Orphans never earns that kind of respect. The script is littered with misogynistic locker room talk, from the use of “ladies” as an insult, to immediately objectifying Vinessa Shaw, who plays Russell’s wife Juanita, as soon as she appears on screen. One could argue this is what young boys would talk like in the 1930s, and truthfully unimaginative banter is the least of the film’s worries, but there’s something so tired about its use.

The sad truth that is revealed in the credits is that football didn’t really save the lives of most of these kids, but likely became their one shining glimmer of happiness they looked back on throughout most of their adult lives while fighting in multiple wars. There is no denying that being parentless during the Great Depression called for a lot of resilience, but 12 Mighty Orphans’ underdog story unfortunately plays out to farce levels of entertainment.