The key to a film is casting. When George A. Romero was hired by the the Lutheran Service Society of Western Pennsylvania and the Pitcairn-Crabbe Foundation in 1973 to make an educational film about the perils of society ignoring the old, he made a genius decision in hiring Lincoln Maazel. A musician by trade, he didn't become a stage actor until 1959 when he was 56, didn't have an on-screen credit until 1966, and was looking towards his 71st birthday when they shot "The Amusement Park" together.

Maazel's age is everything in this long-lost film from the master of the zombie flick. In the early 1970s, Romero was in a career lull. An error with the copyright for his breakout smash and horror gamechanger, Night of the Living Dead, had left him bereft of royalties, and so he was bouncing between commercial work-for-hire and picking up any feature gig he could score, even dabbling with comedy with There's Always Vanilla. When the Lutherans were looking for someone to make an educational movie about elder abuse, and how old people in American society are bilked, ignored, and discarded, Romero was just another director-for-hire. However, rather than handing them a nice little educational movie they could show at fundraisers and bake sales, he delivered a nightmarish, experimental piece that made them go, "Thanks, but no thanks," and bury it for 50 years.

Finally recovered from the archive by the George A. Romero Foundation, and restored by New York's IndieCollect from two faded 16mm prints, its mere existence as a lost Romero is enough to make it worth watching. But it's not simply a dated curio: it's a fascinating if dated curio. Writer Wally Cook set the story in an amusement attraction, and Romero filmed in West View Park (itself on its uppers, a local destination increasingly overshadowed by national megaparks like Disneyland and Six Flags, and driven closer to closure by a fire later that year). Maazel, who sets out the film's agenda in an opening oration in the empty fair, plays an unnamed old man in a white suit who spends the day walking around, increasingly plagued and beaten down by the not-so-metaphorical way that society mistreats the elderly. Pick-pockets, price gouging, ignored by the police and medical professionals, treated as creeps, dupes, victims, and generally just in the way. The old man's optimism about a nice day out curdles under the Kafka-esque light of examination, as he is battered and ripped off. The Grim Reaper, occasionally spotted lurking on rides in the background, is not his enemy, just as the real danger in his Of the Dead films were not the zombies: It's the callousness of regular people.

Haazel (who actually lived to be 106) is heartbreakingly sweet as the old man, and every vicissitude to which he is subjected is as distressing as seeing someone shoplift from Mr. Hooper on Sesame Street. Yet it's Romero's contribution that is most surprising. After the success and personal financial failure of Night of the Living Dead, he spent years in filmmaking limbo, and his next actual feature, 1973's The Crazies, was yet another tank. After that he would not release another film until 1978, when he saw critical acclaim with revisionist vampire flick Martin (also starring Maazel) and box-office success with Dawn of the Dead. So it's easy to see how, even though he was only 33, he would have such empathy for the material. He, too, had been thrown on the junk heap, and looked doomed to remain just some guy from Pittsburgh at a time when there really were no regional film industries. The Lutherans may have blanched at the time (and understandably so, as even Romero's most stalwart advocates must wonder what he was thinking), but he absolutely delivered on what they thought they wanted: His sharp dissection of the weakest traits of humanity.

Available in theatres June 4, and streaming on Shudder from June 8. 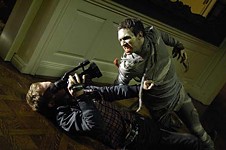 George A. Romero's Diary of the Dead
Every generation gets the George A. Romero socio-political zombie opus they deserve. We must be living right, because this new film cuts right to the heart.