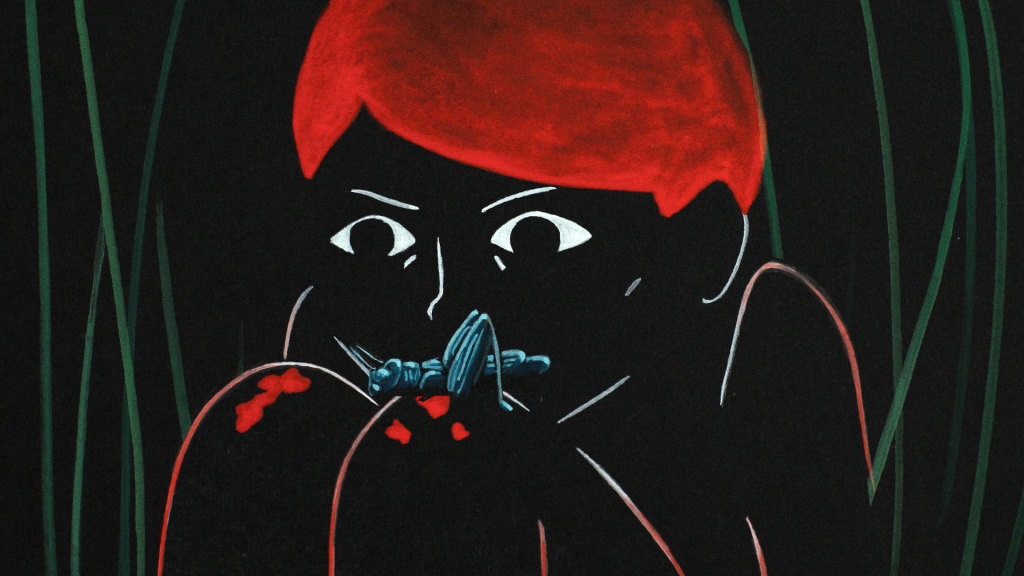 "And Then The Bear"

Curating an engaging shorts program is a bit like crafting a multicourse meal or compiling that perfect playlist. The balance of tonal shifts and complementary flavors should be considered carefully. The films presented here, collected by the Young French Cinema cultural program, offer a wide array of emerging Gallic voices. It’s an eclectic mix of styles that consistently surprises and delights.

"By a Hair" from Lauriane Escaffre and Yvonnick Muller follows Elodie as she frantically tries to prepare for her Beauty Therapy final exam while juggling working in her father’s butcher shop. She is struggling to find a model with hairy legs for the waxing test, but it’s June, and all her friends have shaved for the summer. Her mother’s recent death has strained relations with her father, grief striking both of them in unexpected ways. Inevitably, he steps into help his daughter, and they both take a closer step to healing. It is a wryly funny film with a through line of pathos that is handled delicately.

Melancholy segues into whimsy with Ilias El Faris’ “Sukar,” a day in the life of beachgoers in Casablanca. Young lovers flirt, children bury each other in the sand, and lifeguards and vendors spate against the sun dappled backdrop, and El Faris playfully moves his camera from one droll encounter to another.

Shifting again, we are presented with a boy’s emotional turmoil, as he fears a man has come between him and his mother in the evocatively animated “And Then the Bear” from Agnès Patron. Wild animals lurk in the tall, swaying grass and within the boy’s mind, as houses burn and grasshoppers mate. It’s a haunting array of images that lays bare (bear?) both anxiety and release.

A stranger asks the title’s question to Abdellah in Sofia Alaoui’s “So What if the Goats Die?” A shepherd who has come down to the village from the Atlas mountains to procure more grain for his sick animal, he discovers the town almost completely deserted. Aliens have landed on Earth, and everyone has gone off to the mosque for safety. Abdellah, faced with a world that has been irrevocably altered, confronts obstacles both banal and cosmic in a story reminiscent of the sensibilities of Jim Jarmusch. Bursting with color and movement, the Oscar-nominated animated short “Genius Loci” follows a young woman’s nocturnal journey through the city, awash in the chaos of abstract shapes that come to life accompanied by a cacophony of sounds: papers fluttering, trains passing by, an imposing organ recital. Director Adrien Mérigeau’s film is a beguiling tableau of transformation and self discovery.

Self discovery is also a theme in Merryl Roche’s “Haute Cuisine.” Marie, a young chef struggling to find her footing in the fast-paced kitchen of an acclaimed restaurant, happens upon the secret to her success when drops of blood from a cut in her hand inadvertently revolutionize the sauce she makes every night. But how long can she keep up providing this secret ingredient while navigating resentful co-workers and increasing demand? Roche sustains a wonderful tension while finding inventive ways to extend this classic metaphor. The program caps with the wonderfully absurd (and disturbing) “Olla.” Written and directed by Ariane Labed, whose name may be familiar to fans of Yorgos Lanthimos from Alps and The Lobster. Labed’s short tells the story of an Eastern European internet bride arriving in a small French town. Settled in with her meek new husband and his infirm mother, the film builds on a series of increasingly off kilter scenes examining identity, sexuality, and compassion (or the lack thereof). It’s a fitting finale to an anthology that showcases a distinct array of voices and creativity, while never wearing out its welcome.