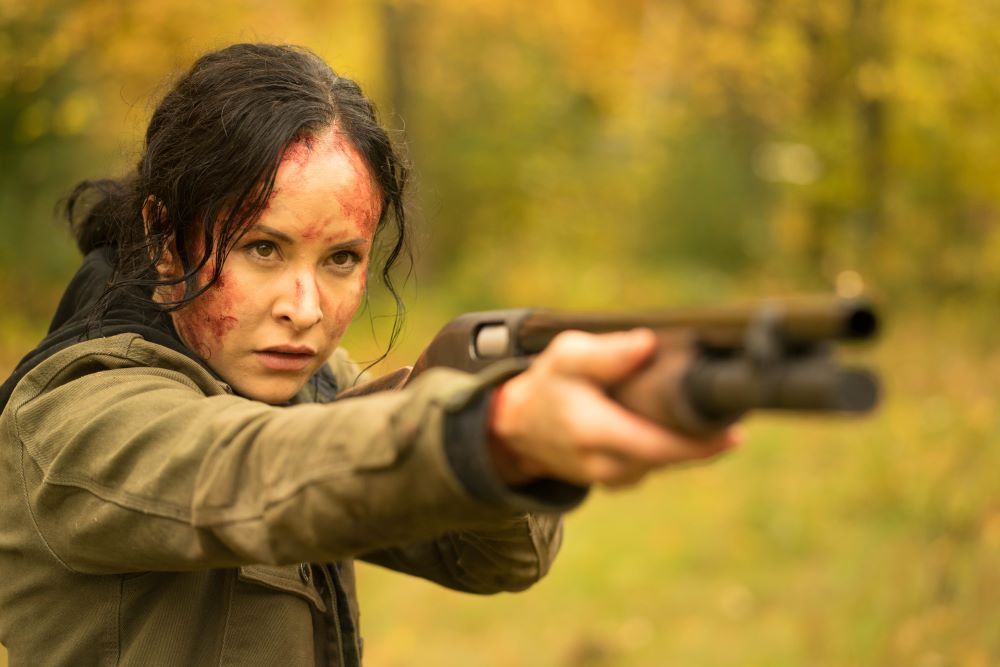 Few tropes of conventional contemporary horror are more frustrating than "bury your gays." The modern descendent of fridging, it's a way to get some character diversity, but restrict it to the supporting (i.e. easily dispensable) parts. Not so in The Retreat, a backwoods bloodbath where the hero couple who work through their issues in the middle of a massacre happen to be lesbians. Renee (Pirie) and Valerie (Allen) aren't quite at the "we need to talk" part of their relationship, but they're definitely at the "so, where do you see us going" stage of questioning. It's sort of inevitable when they're off to spend the weekend with their friends – well, Val's friends, thus the tension – but that's all put into context when they have to escape a bunch of homophobic hicks.

Director Pat Mills is probably better known for his quirky and queer comedies like Austin Film Festival 2013 script award winner Don't Talk to Irene and The Christmas Set-Up, but he definitely has fun with this mild rewrite of the hillbilly horror. The big differentiator from the traditional backwoods survival horror is in having it be a lesbian couple fighting back against the brutal rednecks. Then again, the killers aren't exactly the traditional toothless Wilburs, and Ashmore as the lead killer looks less like The Texas Chain Saw Massacre's hitchhiker and more like the kind of guy that would attend a conservative ag college and come back with a business plan. In this case, it seems to be luring city types, especially queer couples, to a rental cottage and then murdering them on on a live stream. Which seems less sustainable than pivoting to weed or llamas, but far more dramatic.

Mills has a grasp of survival horror pacing that builds up a few good thrills and chills. As Val and Renee wander through the woods, increasingly convinced that someone is watching them, there's just enough tension, and Mills finds a much darker, grimier tone when they're abducted, separated, and tied up whole awaiting their seemingly inevitable fate. Yet The Retreat always manages to take a step back from its innovative or even solid moments. Underlit, shot in the same murky beiges that plague so many low budget horrors, and not as profound as it thinks it is, it isn't quite exploitation schlock or a cerebral shocker, instead relying on both conventions for a hybrid that ends up with the satisfaction of neither. For every convention that gets busted, there's another stereotype just beneath the surface, even if it does slide in a somewhat redemptive "not all good ol' boys" coda that, in context, doesn't really make much sense. If only The Retreat was the forward step it clearly wants to be ...