If your college party experiences were anything like mine, you’ll share the gleeful nostalgia I felt hearing those words in The Get Together’s intro. Will Bakke’s second narrative feature (after 2014’s Believe Me) is a vignette-driven, Austin-set, house party movie. And as we enter a summer where Sixth Street may still feel off-limits while house parties re-emerge, this modest 75-minuter is a delightful kickoff.

Part one follows a recent college grad-turned-rideshare driver named August (Parchman). Searching for a job and a purpose, she begins to notice her best friend McCall (Banner) growing up without her, and as much as she shrieks about it, she can’t stop the process. Parchman nails the role. Assisted by Bakke’s perfectly awkward dialogue, she creates an impossible balance between inserting herself into conversations where she doesn’t belong and remaining sweetly sympathetic.

Part two belongs to Damien, a high-strung late twentysomething from New York played by Glee’s Jacob Artist. (Take a shot if you catch the Glee reference in the script.) He’s in town to propose to his unwitting Austinite girlfriend Betsy (Braddy), but Murphy’s law strikes as Betsy drags him to the titular get together to meet her college friends. As his plans fall apart, Damien becomes almost too tightly wound to bear. But tempers his character’s anxiety with a convincing performance of love, even if the couple could have used more screen time together.

The Get Together’s linchpin is a lovelorn, washed up musician named Caleb (Rose-Garcia, AKA Austin’s own Shakey Graves). Trading advice with August, lamenting bygone history with Betsy, and pretending he’s quit smoking cigarettes, he brings the moodiness every college-adjacent film needs. Any resemblance to Rose-Garcia’s persona as a real musician only enhances the party plot.

The college archetypes get a bit on-the-nose, and some lingering underwater scenes feel jammed in to match other coming-of-agers. But ultimately, the imperfections just feel cute. Bakke seems self-aware that parts of his film have been done before — just like his protagonists realize all their problems are complicated yet still ordinary. While Linklater comparisons will be made (and won’t be wrong), The Get Together might not make the textbooks of indie cinema. Still, grab an Eastcider or a Tito’s cocktail, and watch this with a friend you haven’t seen in a year. Luxuriate in the South Congress B-roll. I think you’ll find it’s the kind of picture we, as 2021 Austinites, deserve.

Available on Apple TV now. Read our interview with director Will Bakke and star Alejandro Rose-Garcia, "Austin-Made Comedy Sends Shakey Graves in Search of Beer and Meaning," May 7, at austinchronicle.com. 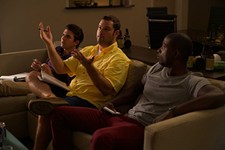 Believe Me
In this faith-based comedy, frat boys create a fake charity to pay back tuition bills.