The Skov dynasty is a house divided in the World War II drama Into the Darkness, a well-intentioned but stultifying history lesson in which the Danish haute bourgeoisie grapple with moral responsibility and patriotic duty during Germany’s early occupation of their homeland. Dramatically speaking, it’s as dry as month-old crispbread.

Beginning with the interruption of an intimate family celebration of Karl and Eva Skov’s 25th wedding anniversary at their country estate in April 1940, as two low-flying Messerschmitts drop leaflets announcing Hitler’s relatively bloodless invasion of Denmark (non-aggression pact be damned), the film wastes little time in dutifully framing its pivotal question: When does the pragmatism of survival become collusion with the enemy during a time of war? At first, the well-to-do Skovs and their grown offspring react to the reality of a foreign power’s non-militarized occupation of their country with the naiveté of the privileged class. After a while, each character eventually makes a choice (ideological, emotional, or otherwise, including no choice at all) regarding the path he or she will follow, with the professional dilemmas faced by the elder Skov (Christensen), the film’s conflicted patriarch-industrialist, receiving the most attention. (The character operates in a constant state of self-rationalization to justify his business collaboration with the Germans.) Predictably, familial bonds strain under the social and political pressure, though the dramaturgy is tepid at best. It’s sort of like Luchino Visconti’s The Damned, but without the incest, transvestitism, homosexuality, and other signifiers of Nazi decadence that lurid 1969 film used with deranged abandon. Call this one The Darned.

You’d think this chapter in Danish history would inspire passion in a native filmmaker, but the movie lacks fervency. Perhaps that’s a hallmark of director Refn’s even-keeled style, which is radically different from the way son Nicolas Wending (Drive, The Neon Demon) makes movies. The production values are competent, but nothing jumps off the screen. It’s all just a respectful blur. What’s ultimately most bewildering about Into the Darkness (a conflated title if there ever was one) is its abrupt conclusion. After 180 long minutes, it chronologically ends around the close of 1942, leaving the ultimate war-time fates of its characters dangling with a vague postscript noting that the Danish resistance movement didn’t fully materialize until 1943. It’s a puzzling finish that invites you to speculate what happened next, though it’s doubtful you’ll be interested enough to do so. 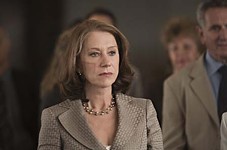 The Debt
Helen Mirren stars in this film that's part espionage thriller and part moral meditation, though the emphasis leans more toward the former than the latter. The Young Victoria
The emotions of the teenage Princess Victoria (played by Emily Blunt) are the subject of this well-made palace tale.