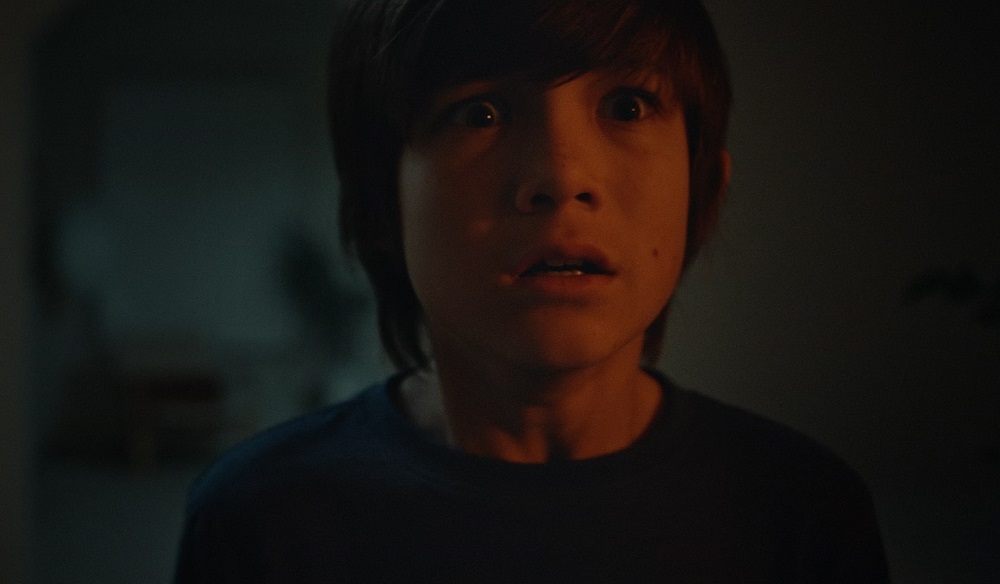 Where does evil come from? Supernatural horror films often bury themselves in cosmological exposition. For The Djinn, filmmaking duo David Charbonier and Justin Powell cut through any mythology by cutting away the mumbo-jumbo. There is no reason given for why a grimoire, wrapped in old cloth, would be precariously balanced on the shelf in the apartment into which young Dylan (Dewey) and his late night AM soft rock station deejay father, Michael (Brownstein), have just moved. Is it something to do with the last tenant, who died in mysterious circumstances? Or is it simply that the tome and the spirit contained within its pages are drawn to sadness and need, to wishes and desire? David has enough of those to drown him, blaming himself for his mother's absence (a suitably heartbreaking event that he replays in flashbacks). If he wasn't mute, he reasons, then everything would be fine. And that's the kind of thinking that brings the sinister, shape-shifting djinn of ancient Arabic lore into his tiny home.

If Charbonier and Powell's debut, the disturbing dark adventure The Boy Behind the Door, felt claustrophobic, then it has nothing on The Djinn. As the summoned spirit wafts through the house, it's clear exactly how small a space it is. Unlike the rambling farmhouse of their debut, this is small, uncluttered, with clean lines – much like the story of The Djinn itself.

Stripped of excess, what's left is an experiment in minimalism. After Dad goes to work, Dylan is left alone with the djinn in a game of cat-and-mouse that is almost completely wordless save for the odd recitation from the Book of Shadows by Brownstein (a curious decision that makes perfect sense: Of course Dylan would hear words of hope and optimism in his father's voice, making him a perpetually soothing presence even when he's off pulling a night shift). When words are finally said, the break in the silence is as shocking as the malevolent specter's ability to shape shift. That's a smart decision by the filmmakers, giving the pursuit a strange sense of vertigo that simply having Dylan pursued by the leathery, clawed beast would never have achieved.

With their debut, Charbonier and Powell proved a rare grasp of childhood horror, and keeping the perspective of youth among adult sins. The Djinn is even more reliant on that ability, and on their extraordinary relationship with the returning Dewey. The young actor makes Dylan's foolish dabbling with the uncanny, and his wily evasion of the evil in his home, something we believe, and the childhood hero we all hoped we could have been, and for whom we fear.