The killer wears a black hoodie, an MF Doom mask, and a utility belt. Their weapon of choice is what appears to be a tactical power drill, used to crucify victims all across the college grounds. From the belly of a frat house to the university president's office, Initiation paints its campus with sticky pools of student blood.

The slaughter takes place at a university where a group of students (the men all belonging to one frat, and the women all members of one sorority) are picked off one by one by the masked murderer. At the film’s outset, writer/director John Berardo brings us to the standard frat house where the guys are hosting a predatory frat party. Everything is bathed in ultraviolet light. Unidentified liquids are poured into unsuspecting sorority girls’ cups. Before their guests arrived, the bros amped each other up in a dingy basement, talking about how to identify the “sluttiest” women on campus and singing the old sexual refrain about digits, pink and stink. Now those bros trade foreboding glances, and one particularly gross pretty-boy sends cryptic text messages. The film leans into the threatening inertia of a frat party, and the party ends when Ellery (LaVanchy) finds little sorority sister Kylie (Gomez) conspicuously passed out in a bed with the door locked. Is this the trigger for the murderer’s rampage?

Yet as the bodies mount, the film becomes a police procedural, where administrators, cops, and one officer (Huertas) inexplicably wearing head-to-toe military fatigues, conduct interviews with the student suspects. This is where the film falters in pacing. Berardo gestures toward commentary about on-campus sexual assault, and how poorly schools handle the issue, but mostly glosses over it. What could and should be a serious commentary becomes a meandering deviation in an otherwise standard slasher.

There is at least a good amount of visual experimentation. Berardo modernizes the classic campus slasher through a novel response to the challenge contemporary horror filmmakers face when every potential victim and witness has a cell phone. Aside from the saturated color palette, he invents a stylized way to display cell phone interfaces on screen, with Instagram, Twitter, and text message feeds floating around the characters' heads. Beyond the spoken dialogue, there is an ongoing flow of cellular communication, creating a rare example of convincing in-movie text message banter.

Despite the students’ ceaseless connectivity and the ongoing investigation by the police, the masked killer catches many victims literally with their pants down, leaving them slumped in their own blood before they can dial 911. Though each murder feels brutal and kinetic, they are over rather quickly. The final chase sequence in the familiar maze of an administration building marks a marathon of violence. Yet even when the killings reach their crescendo, there is a notable lack of true terror, due mostly to the fact that most characters lack the depth to warrant much audience concern for whether they live or die. 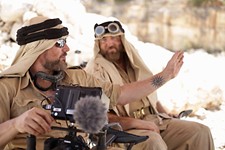 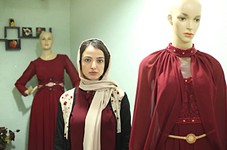