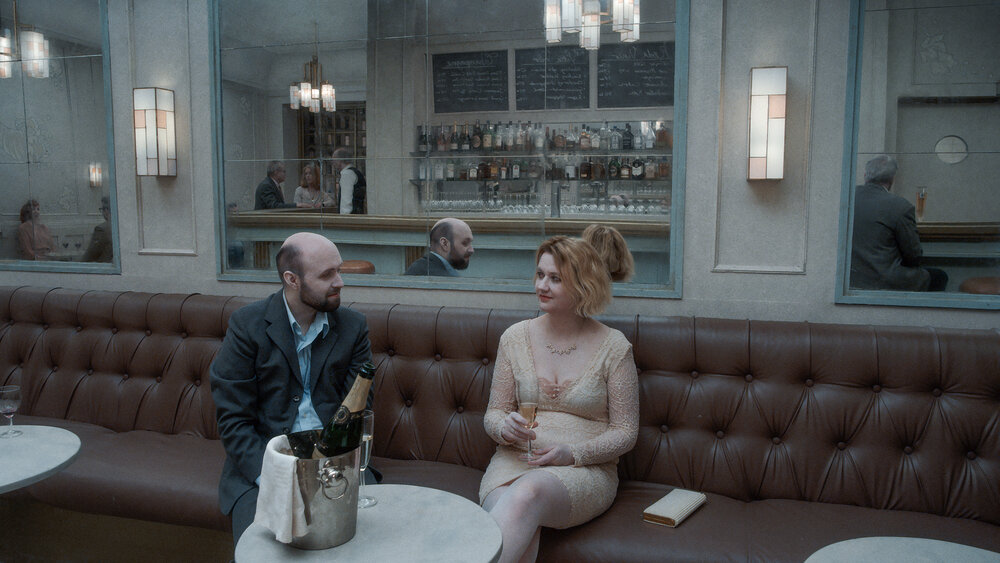 Village Voice film critic J. Hoberman once described Swedish filmmaker Roy Andersson as a “slapstick Ingmar Bergman,” which is as apt a designation as any. Both artists lay bare the plights of anguished souls in existential crisis, but Andersson’s view of the prosaic absurdity of the human condition is often tempered with humor that almost, but not quite, softens the blow. Black humor, perhaps, but I prefer playwright Eugène Ionesco’s term “tragic farce.”

Andersson’s films – About Endlessness marks his fourth feature in two decades – are not conventional narratives. They’re not even traditionally experimental, but rather a collection of intricately rendered living paintings depicting the minutiae of everyday life in all its mundane glory. A woman’s shoe heel breaks as she pushes a stroller through a train station. A father stops to tie his daughter’s shoe in the pouring rain as they walk to a birthday party. Two lovers float over the ruins of a once beautiful city. A man sobs as he holds his dead daughter after murdering her in an honor killing. A priest has lost faith in God, and his psychiatrist speculates that perhaps God doesn’t exist, and maybe we should just be glad to be alive. Three young women do a giddy, impromptu dance to a Delta Rhythm Boys classic for a handful of bar patrons. Funny, tragic, moving scenes unfold in Andersson’s meticulously crafted frames. In cafes, bedrooms, offices, street corners suffused in muted off-whites and grays, with characters (mostly nonprofessionals) participating in a sublime ballet of choreographed insecurity, doubt, and frustration, but also of tender and fragile grace.

And that is the brilliance of Andersson’s work, and why he is rightly referred to as one of the most important directors living today. He is able to utilize a rigid formalism to distill truly sublime moments of recognition, to convey complex emotional ideas in his pedestrian tableaux, skewed with just enough of his off-kilter sensibility to create a distance that makes the identification of our inadequacy as human beings a bit more comfortable. That distance may explain why a friend once remarked that she could admire Andersson’s films, but never really like them. It’s a valid point, and I don’t think I could live in his grotesquely mordant universe, but I will gladly visit whenever the opportunity arises. It is the theatre of the absurd at its most humane.

A Pigeon Sat on a Branch Reflecting on Existence
...