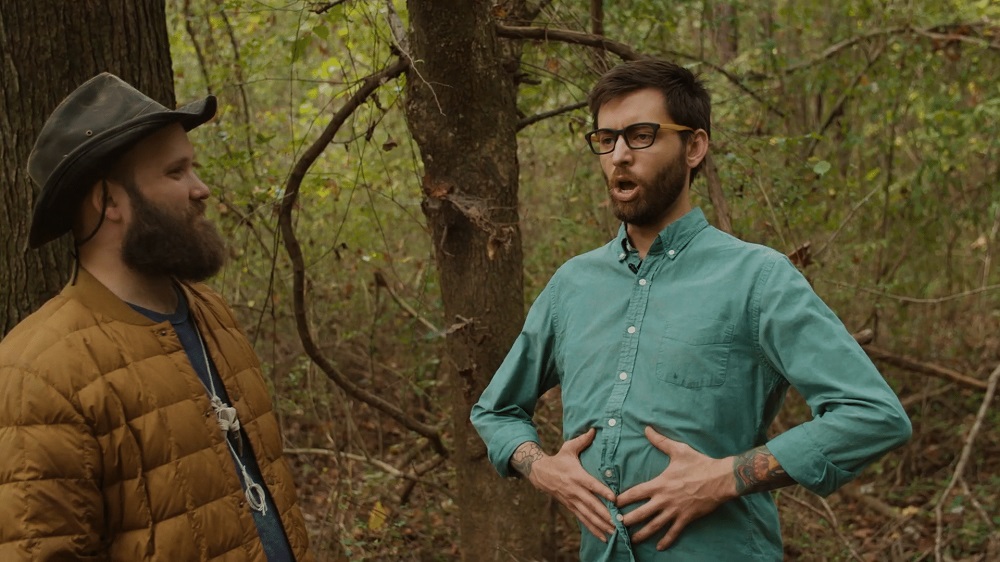 Things aren’t looking too rosy these days for online journalist Brian (Emond). Even though he has a plush gig working for the edgy New York media company Compound, his assignments are relegated to clickbait stories about artisanal antibiotics and the craft beer scene in war-torn Ukraine. He yearns to tell the important stories. Frustrated and dejected after being passed over for a promotion, Brooklynite Brian and his producer/cameraman Zach (Lamplugh) have now been tasked with interviewing a rural cryptozoologist and Bigfoot enthusiast Jeff (Stephenson) and venturing into the wilderness of the Appalachians in search of the elusive Sasquatch.

The film, formerly known as The VICE Guide to Bigfoot, had its world premiere at the Austin Film Festival in 2019, and it’s now getting a proper release, with an unfortunate title change that wasn’t clever even when it was relevant. A mockumentary of the now easily identifiable VICE style commodities targeting millennials, the film works best when it parodies, via the fictional Compound, the vapid programming of, say, a stoned hip-hop star hosting a food show. But once Brian and Zach head into the woods with Jeff, the film becomes an increasingly laborious, shaky-cam mess. Tiresome found footage horror themes include getting lost, low battery drama, a clash of egos, and menacing hillbillies, which would be fine if the film had more than lazy jokes. It feels like a comedy sketch stretched too thin, going off the rails and landing onto tedium. All the good bits are in the frontend. Even when, in the shambles of the third act, Bigfoot finally shows up, it just feels like a relief because you know the credits can’t be too far behind. However tempting it may be to risky click on 15 Things You Didn't Know About Bigfoot (#1 Will Blow Your Mind), you’d be advised to save yourself that now common feeling of shame for being so gullible.