The template of The Resort is simple: Four friends escape to Hawaii for a birthday vacation, they explore an abandoned hotel resort that the birthday girl believes to be haunted, and unfortunately for them, it actually is. The ghost-loving gal is Lex (Haase), a horror author obsessed with haunts and, as the opening informs us, the sole survivor of the deadly vacation.

The spooky setup of The Resort is a mess. The film is told from Lex’s perspective from a hospital bed, and every flashback is prompted by a question from a detective (Sheridan). The flashback that lays out the groundwork is the actual night of Lex’s birthday, and over cake her friends inform her that they managed to find someone to personally take them to the haunted resort that she plans to write about for her next book. For a group of friends who managed to do the impossible, they knew little to nothing about the actually haunted resort itself, but a quick cut to an old video vaguely spells out everything: It was abandoned after many guests experienced strange, violent paranormal activity from a figure known as “The Half-Faced Girl.”

Director Taylor Chien comes from a background of commercial and sport shooting, which explains the luxury locale and the picture-perfect cast. He’s comfortable directing a party, like when the group stops to frolic at a waterfall, and drone shots of the lush, green landscape are pretty and abundant. He is good at getting his audience in the headspace of a getaway, but when it comes to directing a story, it’s far from polished. The sound editing is a mess, missing essential room sound at odd pockets, and dialogue sometimes clashing with foreground and background conversations.

The direction for the actors is aimless, scattered, and hollow. They mouth inaudible things to each other while another character is talking, distract when they are supposed to be in the background, and lack any sort of chemistry. The latter could have possibly been saved by a decent backbone for their friend circle, but outside their attractiveness it’s hard to see why this group of gym rats went on a haunted tour for Lex in the first place.

Chien thinks his script is smarter than it is, with cheeky horror references like Lex mentioning how scary it would be to walk out of the shower and there be writing on the mirror, or non-believer Sam (Vlamis) mansplaining sleep paralysis to Lex to “prove” that demons and ghosts aren’t real. But behind hollow horror knowledge, there’s nothing particularly terrifying about this haunting. It’s a straightforward, basic idea dragged through the mud. Chien’s script doesn’t build on the resort’s curse, it isn’t interested in the desires of its characters, and it doesn’t seem to understand even what makes a horror movie tick. The Resort is an unfortunate mess of a first film that at one point in time would have maybe found a second life on a video store shelf next to the likes of Turistas and The Ruins, but is destined to be swallowed up by the endless abyss of VOD. 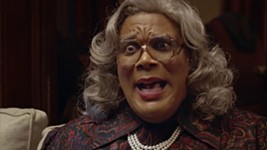