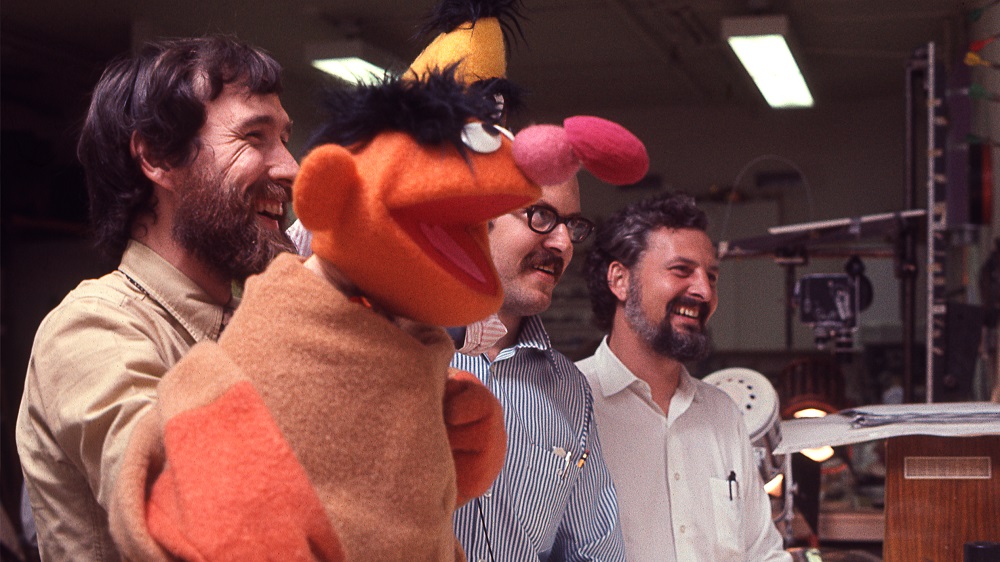 Street Gang: How We Got to Sesame Street

I'll always remember where I saw my first Hispanic person: She was on Sesame Street. Growing up in industrial Northern Britain in the 1970s, there were no Hispanic people, and so seeing Maria hanging out with Oscar, and Big Bird, and Gordon, and Bert, and Ernie, was one of those quiet teaching moments that made Sesame Street so important.

With everything everyone knows about Caroll Spinney from I Am Big Bird, and Kevin Clash via Being Elmo, and having grown up with Jim Henson and Frank Oz as our uncles inside the TV, historical documentary Street Gang takes one step to the side behind the camera to get the first real documentary look at three of the people who made it possible. At the strategic level, there were Joan Ganz Cooney, the producer who convinced the Carnegie Corporation to get involved with a crazy idea called the Children's Television Workshop, and Lloyd Morrisett, the experimental psychologist who saw the power of television as an educational tool. Forging the day-to-day tactics, and living down in the trenches, was Jon Stone, the often-overlooked original head writer, and director of 203 episodes between the premiere in 1969 and his death in 1997. Between them and the rest of the team, as documentarian Marilyn Agrelo (Mad Hot Ballroom) shows, they created a revolutionary piece of television.

In many ways, Street Gang is closer to the Austin-made history of Nickelodeon, The Orange Years, than to the higher-profile Won't You Be My Neighbor?. Morgan Neville's biographical documentary about Fred Rogers was far more about the impact of one extraordinary man who dedicated himself to making everyone feel special. Instead, Agrelo puts the show into its game-changing context. As one contemporary interviewee puts it, Sesame Street was "what television would do if it loved people, rather than tried to sell to people." Every decision was a risk, based on research, intended to give kids what they wanted so that they could get what they needed – truly educational television. That's where the Muppets had their impact, and Agrelo contextualizes how berserk the decision to bring Henson et al on board was. At a time when Cal Arts animation has become de rigueur on most kids channels, it's easy to forget how anarchic the decision was to hire these long hairs, best known for late night chat show sketches and edgy TV commercials.

Where Street Gang does veer into the same territory as Won't You Be My Neighbor? is by stressing how the show dreamed big by keeping everything small. These were the people that you meet (when you're walking down the street) the people that you meet each day. And don't pretend that you didn't just hear the song in your head right then, or remember when Mr. Hooper died and you were as sad and angry and confused and hurt as Big Bird, or how you laughed when the baker fell down the stairs with those five fancy fruit cakes. Street Gang is filled with these unbelievable shared moments, these foundational skits and sketches that connected us – and, unlike the very American Mr. Rogers' Neighborhood, did so globally. It didn't just teach numbers, it taught diversity and understanding. Normally, when a documentary makes grandiose claims about how a work of art had an outsize impact, it feels like hyperbole: but when Emilio Delgado notes how important it was that Luis was just a regular guy (not a gangster or junkie, the only jobs for Latino actors), it's hard to deny.

Of course, the show fell over its own feet occasionally, and the departure of Matt Robinson, the original Gordon, is clearly a failure that has to be discussed. Yet Street Gang's focus on the original creators means it doesn't tackle some more recent controversies, like the 2015 HBO deal, or the increasing dominance of Elmo (aka the Little Red menace). Similarly, it can't avoid the tension over how Stone's legacy has been overlooked and diminished, and so makes giving him his fair, if belated, plaudits a key element of the story. After all, Street Gang absorbs what was truly important about the show: that not every lesson is going to be fun, but that doesn't mean everything is terrible. Most importantly, it taught small kids their ABCs and 123s, while showing them that a beat-up, diverse neighborhood just like theirs could be the best place on Earth. Mad Hot Ballroom
The filmmakers would have us embrace their work as though it were the Spellbound of grade-school dance documentaries, but the film loses its footing.

Street Gang: How We Got to Sesame Street, Marilyn Agrelo