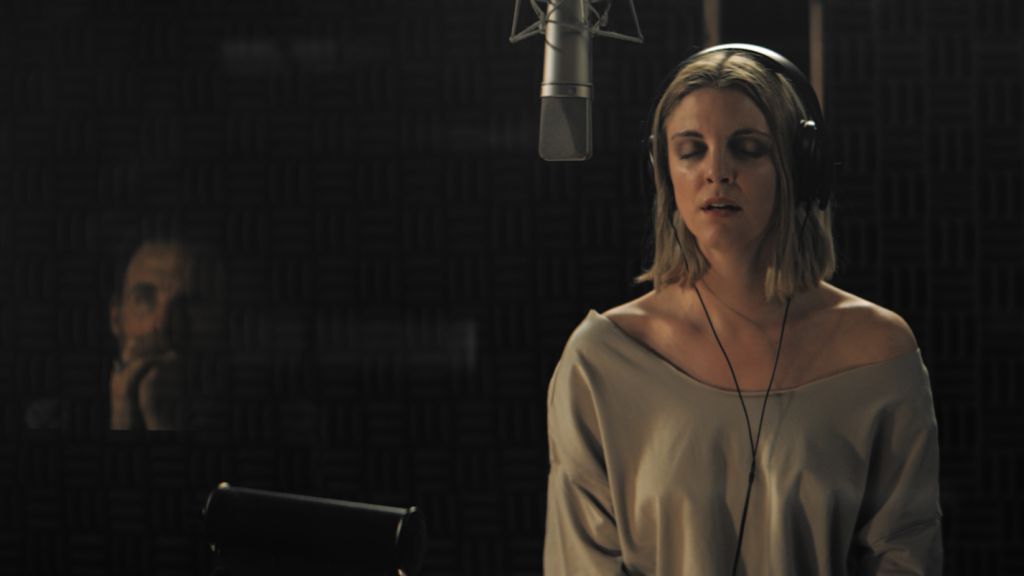 A symphony in moonlight and nightmares, Fantastic fest 2020 werewolf horror Bloodthirsty simmers around the score by Canadian musician Lowell, and plays around with the old melody of the sophomore album blues. Grey (Beatty) is the hot young thing, in a Lana Del Rey/Billie Eilish/Adele style, but things are cooling off fast, with an edge of desperation that feels like she'll be a one-hit wonder. That's why she takes the risk of signing up with enigmatic producer Vaughn Daniels (Bryk) in his snowy, remote, castle-like studio. A former boy band star, he's been there, done that, but there's as much Phil Spector as Lance Bass about him, with a suspicious death hanging over him, and a mystique that's not been helped by his reclusive ways. That suspicion is how Grey's partner, Charlie (So), convinces the artist to let her tag along, just to keep an eye on her and whatever Vaughn has planned.

In her first feature, Bleed With Me, director Amelia Moses used vampirism as a tool to explore toxic friendships: in Bloodthirsty, it's clear that the lycanthropic fate that awaits Grey is less than metaphorical. From the opening moments as she dreams of tearing bloody chunks out of the carcass of something, only to wake with blood in her mouth, it seems inevitable that the medications she rejects weren't going to solve whatever it is that's rippling under her skin, scratching to get out. What's daring and innovative within the genre is that Lowell's script (co-written with producer Wendy Hill-Tout) dares to question the connections between dark art and those who are drawn to create it. It's a line of discussion most commonly deployed by censors, but by coming from the other side of the equation, Lowell and Moses get to ask some uncomfortable questions – and, much like Jay Baruchel's recent and much more controversial Random Acts of Violence, come up with some equally disquieting answers.

Lowell's gothic-tinged pop provides the backbone for the narrative, as Grey struggles with who or what exactly she is. In the recording studio it goes through as much of a metamorphosis as Grey (a minor chord there, a subtly shifted lyric here) with the underlying question of how much she will embrace what Vaughn offers. There's a seduction, as Vaughn encourages Grey to pull away from Charlie's offering of domestic bliss, but it's artistic, not sexual. Yet Bloodthirsty isn't afraid to look at the Faustian pacts that so many artists are willing to not simply accept but actively embrace. The creatures of the night may make beautiful music, Bloodthirsty howls, but that often comes from an inner darkness.

Available now on VOD. Read our Fantastic Fest interview with Amelia Moses, "The Creatures of the Night Make Beautiful Music in Bloodthirsty," Sept. 24, 2020.