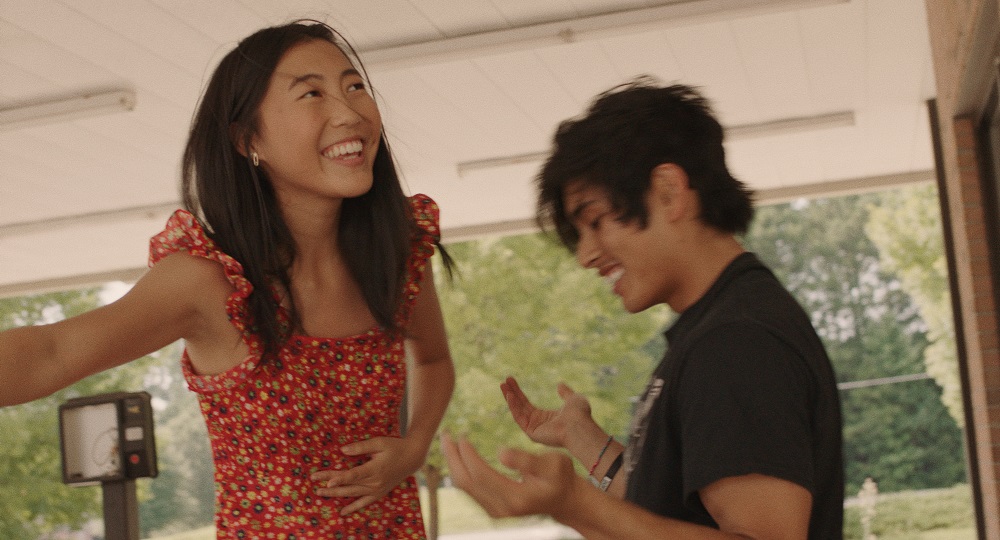 Not every short film needs to become a feature. In his 2018 10-minute film, "Krista," writer/director Danny Madden had a laserlike focus on the titular theatre school kid, but the expansion into Beast Beast brings in two completely new characters and interwoven threads. It also shifts the target of discussion. In the short, Shirley Chen's character uses her acting class as a way to strike back at sexual harassment and objectification. In Beast Beast the returning Chen plays a different but similar Krista, a high school drama student who crosses paths with Nito (Angeles), a skateboarder with a rough home life but a friendly, earnest demeanor. He's her locker neighbor, but her real neighbor back home is Adam (Madden), a 24-year-old with a YouTube channel about his gun collection.

If that sounds like the setup for a boilerplate school shooting narrative, it's not. While the painful ramifications of America's obsession with gun culture are clear, and presented in the narratively inevitable bloodshed, Beast Beast aims for a broader view of what it is to be Gen Z in an unnamed Southern suburb. However, aiming doesn't mean it hits its target.

Drowning in good intentions, Beast Beast skirts with insight into what it is to be young in an America that lives online and dies in cold blood. Yet it's so heavy-handed in its execution and reliance on stereotyping for its three central characters. The driven and academically gifted Asian American kid, the rough-and-tumble Hispanic teen with a heart of gold but criminal friends, and the middle class white kids with parents who just don't understand him yet provide easy access to guns: However well-performed these parts are (and Angeles, Chen, and Madden all give them sympathetic inner lives even when that's challenged by their actions), they all feel rooted in broad stereotypes. Chen is given the most room to shine with a rounded character, and she does so admirably, but both Angeles and Madden are left to fill out simplistic outlines of characters. While the story zigs where it could readily have zagged, interesting choices are abandoned: Adam is a textbook incel, when the script could have said something interesting about the wave of twentysomethings forced by economic circumstances to live with their parents, post-college. Worse, the final act sells out any social realism and replaces it with what can only be seen as some sort of revenge of the theatre nerds, a clumsy decline into wish fulfillment. The narrative trick that worked within the narrower confines of "Krista" seems almost absurd here, a leaden feel-good ending that sits at complete odds with the formless opening.

Beast Beast is far better when it's abstract and observational, drifting somewhere between the wistful compassion of Jonah Hill's Mid90s and the sociological immediacy of Larry Clark's Kids. In the opening fly-on-the-wall sequence, with its implicit commentary on the way that social media has rewritten the rules of engagement and culture for Gen Z, the old lunchtime cliques are translated online as subreddits, and letters shuffled between desks in class are now likes and subscribes. It's in the push to explain a moral that it stumbles over its own good intentions.

Available now on Alamo on Demand.