There are meet-cutes, and then there is ... however you describe how Mickey (Stan, Marvel's Winter Soldier) and Chloe (Gough, Colette, The Other Lamb) enter their whirlwind romance. Drunken hook-up is probably the best description, as they are thrown at each other during a beach party in Greece. They've both washed up on the Aegean coast with no long-term plan: She's been working as an immigration lawyer but really just running from her Rust Belt hometown, while he's DJ'ing in beachfront bars because, well, that's what a failed New York musician is supposed to do. Yet that one night becomes a relationship, mostly anchored in their lack of any other plans and mutual attraction. However, Monday asks, what happens when that thing you do with your life in lieu of a plan becomes the plan?

There's something utterly organic about Gough and Stan's interaction, as if the audience is intruding but the pair don't really care – a sensation caught in a moment when the camera clearly has to dodge a piece of falling furniture. You almost expect Mickey and Chloe to turn and apologize, so natural is their pairing. But the easy chemistry of the actors doesn't translate into a seamless relationship for Chloe and Mickey. Instead, it's arguably the best depiction of what it is to enter a relationship with a few decades of baggage since Andrea Riseborough and Karim Saleh dug through their old romance in Luxor.

Monday can be seen as a third chapter to Papadimitropoulos' ruminations on dissolution and aimlessness in Greece. With his 2011 international breakout, Wasted Youth, he looked at street kids in Athens, but his tale of lovestruck and love-blinded expats is an even more direct follow-up to 2016's Suntan, and its exploration of a middle-aged man desperately hanging on to his ebbing virility. However, Monday is more restrained than either, as Papadimitropoulos' earlier works always seem to dissolve into acts of unexpected violence that give an easy narrative out. In his English-language debut he instead lets each day have its own resolution, whether happy or sad, angry or passionate.

That's why he builds the story through series of interwoven vignettes showing a relationship in slow-motion decay and restructuring. Every sequence (as indicated by interstitial cards) is a Friday, a chance for the couple to reset back to that impetuous first night on the beach, and to Mickey's absurd and spontaneous act that kept Chloe from flying back to the States in the first place. Both are in an extended adolescence that would be obnoxious if the film's understated observation, and Gough and Stan's perfect re-creation of thirtysomethings desperate to evade growing up, didn't hit so hard. That gorgeous stranger at the bar may stay gorgeous, Papadimitropoulos suggests, but the antics of youth and whirlwind romance have an undoubted expiry date. What comes next is the big question, and that progression of Fridays has to turn the page on the calendar at some point. 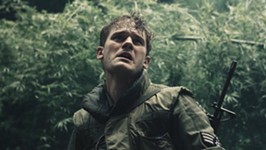