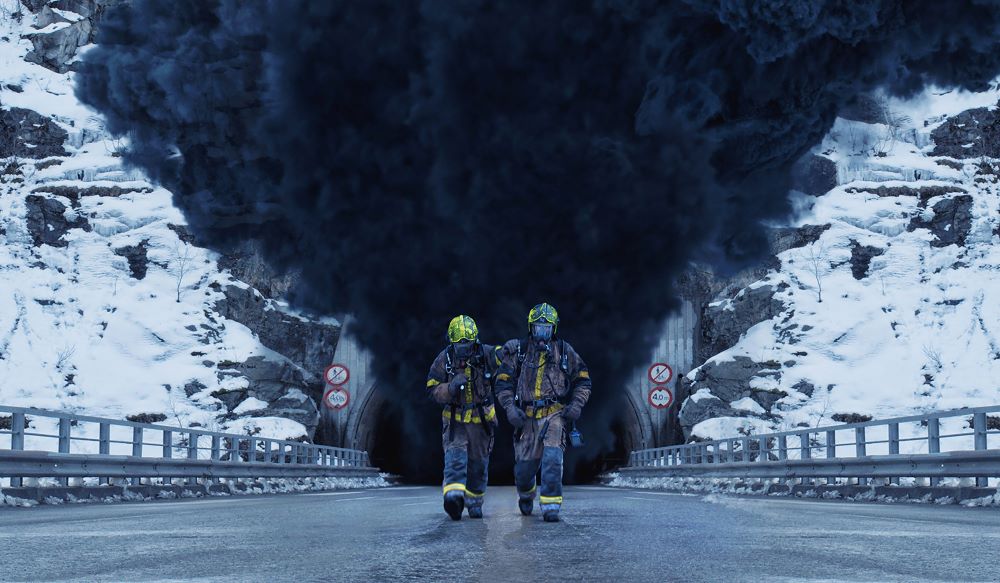 If Scandinavian cinema has taught us anything over the last few years, it's that Norway will try to kill you. Not the people, or the animals, but the geology of the country. America's last great disaster movie, Greenland, had terror come from the skies, but The Wave and The Quake showed the massive devastation that tectonics can wreak upon a community. Even the more intimate Breaking Surface showed that underwater boulders are just waiting to attack. Now the The Tunnel (Tunnelen) goes underground, where plucky survivors are trapped under a mountain with fumes making it harder and harder to breathe.

There are, as pre-credit cards note, 1,100 tunnels under Norway (when your nation is mostly mountains and waterways, going through is a lot easier than over or across). Accidents in these long, enclosed spaces are inevitable, and The Tunnel is loosely based on the 2016 Skatestraum incident, where a fuel tank crashed and caught fire. For the home country audience, for whom these events are headline news, that setup is nightmarish enough, and sets up all the stakes you need in the first 15 minutes. Elise (Fuglerud) is still in mourning for her mother, while her father, taciturn but inwardly wounded snow plow driver Stein (Harr), is almost ready to propose to his new girlfriend, Ingrid (Carlehed). Throw in truck drivers, a hitchhiker, a bus on its way to Oslo, rescue workers, traffic control staffers, adorable kids in peril, and the worst kind of entitled douchebag (a Tesla driver!), and everything is in place for the inevitable fire under the mountain.

Much like its recent Norwegian antecedents, The Tunnel is not afraid of Chekhov's gun. Of course Stein has a rescue worker training that will send him in to the smoky hell, and of course Elise (as shown in an swimming pool sequence) can hold her breath for a very long time, and of course that's a skill her dad taught her because it would come in useful eventually. The Tunnel understands that there is an equation to disaster movies, one built on a mixture of spectacle and humanity. Yet the spectacle is on the smaller side: apart from a couple of impressive stunts and explosions, and a memorable plume of smoke emitting from the tunnel exit (taken almost straight from the Skatestraum news footage), there's a lot of stumbling through the dark. Fortunately, the humanity more than makes up for that. Norwegian disaster movies have retained a sense of tragedy, that these are not events that produce two-fisted heroes that can punch out a landslide. The Tunnel may be shrouded in blistering embers and fumes, but it never loses sight of the victims and helpers, of whom there are many. Just as it's an ensemble drama, so it's the community that saves what it can of the day, and gives a feel-good ending with a tinge of sadness.