In her 2018 short comedy, "Shiva Baby," Emma Seligman cast Rachel Sennott as Danielle, a young Jewish woman begrudgingly attending a mourning gathering, only to run into the man who just paid her for sex. In extending the story to a feature version, Seligman doesn't shift beyond the walls of the grieving rooms, but instead wisely crams more people in. The original was a little more ambiguous about the exact nature of the relationship between Danielle and her benefactor, as the man hands her cash after the dirty deed. This time, it's a bracelet, establishing that Max (Deferrari, recast from Jason Keller in the original) is a sugar daddy to Danielle (the returning Sennott). Her only profession at the moment is disinterest, telling her parents that she's working as a nanny, and assiduously not asking too many questions about the guy paying her bills. The self-deception doesn't have the resiliency to withstand the shiva she's been invited to for some distant relevant. She has to contend with her prying mom (Draper, caustic in private about her daughters bisexuality, prim in public, yet lewd with her fellow mothers) and dad (Melamed, perfectly goofy), and her ex, Maya (Gordon), all in the same room. The ticking time bomb of social niceties goes off in her face when it turns out Max is there too – and he's not alone. His wife, Kim (Agron) is there (a shiksa, Danielle's mother spits), with their baby, and that's just the beginning of her bad day.

Seligman's script will strike a sharp chord in anyone that has run into overly-complicated situations at a family gathering (i.e., just about everyone). It feels like a hurdy-gurdy that is just enough put of tune to leave you uneasy, a sensation of queasiness further unbalanced by Ariel Marx's discordant, scratchy, string-and-timpani soundtrack. It feels purloined from an avant-garde horror, and there are moments when Maria Rusche's cinematography matches it, veering from social anxiety to leering claustrophobia. But at it heart Shiva Baby is a witty, wry observational farce about the lives of the petite bourgeoisie, and every time it risks a turn into the overly-dramatic, there's Draper and Melamed as Danielle's parents, bickering lovingly about lost phones (a recurrent gag and source of stress) and dementia.

But it's really Sennott's performance as Danielle, fumbling towards some kind of responsibility, that keeps Shiva Baby interesting. There's an ambiguity to her, essential in keeping the audience from guessing how prepared she is to blow up her own world. It's increasingly clear, as the inevitability of someone putting two and two together grows, that she's really sitting shiva on a life that is no longer tenable, even if she's not sure what to do next. In that grasp of twentysomething aimlessness, Sennott and Seligman make Shiva Baby more fulfilling than grazing on a condolences basket. 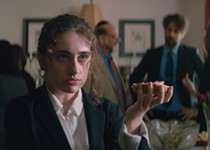