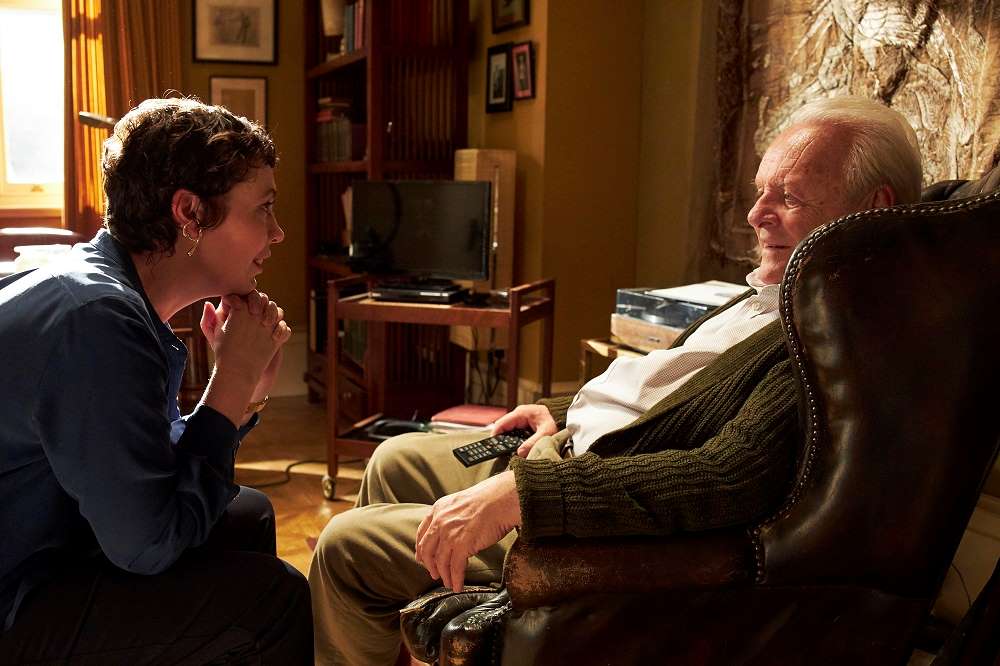 Long before it was ever committed to film, Florian Zeller’s Le Père (The Father) was already considered one of the great plays of the 21st Century. In 2016, actor Frank Langella debuted an American adaptation of the original West End production, earning the Best Actor award at the Tony Awards for his work. And now Zeller has followed in the footsteps of many great directors of the stage and screen, directing his adaptation of The Father with an all-star cast and a considerable amount of award season hype.

Even in his advanced age, Anthony (Hopkins) is more than capable of taking care of himself. Or so he tells his oldest daughter Anne (Colman) when she comes to discuss placing him in a residential facility. The truth is things are starting to slip for Anthony. People he does not recognize wander through his apartment, and his new caregiver (Poots) often acts like they have just met or have gotten along well for days. Caught between fear and rage, Anthony must do his best to wrest some small amount of control over his life as it unfolds before him.

Stage adaptations have always been a double-edged sword for filmmakers. Skew too close to the source material’s staging, and critics will dismiss your adaptation as “stagey.” Overextend the scope of the script, and you start to lose the intimacy of the original production. The Father’s biggest surprise is not its ability to walk this line unscathed but its innate understanding of where the theatrical and the cinematic intersect. In Zeller’s hands, a few key props and a modular apartment building turn “stagey” into the ultimate compliment.

When coupled with cinema’s immersive elements, our lack of agency as viewers is the perfect vehicle for Anthony’s dementia. We experience time in a linear manner onscreen, but the inconsistencies between segments – the way characters disappear or reappear wearing the face of another actor – manufactures both sympathy and a deep sense of unease. And rather than detract from the performances, these production choices are essential to our understanding of Anthony. We watch in real-time, again and again, as he retreats from confusion and finds comfort in his anger.

And in choosing Anthony Hopkins as his lead, Zeller has made the rare choice that is as obvious as it is correct. While much of the conversation around The Father may seem reduced to its award season potential, this should not overshadow the depth that Hopkins brings to this role. It is a credit to the performance that we are never entirely sure how much Anthony understands at any given moment. The line between righteous indignation and self-preservation has been completely blurred, and it isn’t until the film’s final few moments that we see Anthony with his guard completely down.

Only those who have been through this experience – who have cared for a loved one who has dementia – can speak to the accuracy of this approach. For the rest of us, The Father will serve as welcome humanization of those suffering from a most alien disease. For as much damage as this sickness can do to the friends and family of those afflicted, the victims themselves are too often reduced to supporting characters in their own stories. It takes the best of theater and film to get it right. The Virtuoso
Murder for hire and betrayal for fun Nightsiren
Tereza Nvotová’s bewitching horror makes her one to watch