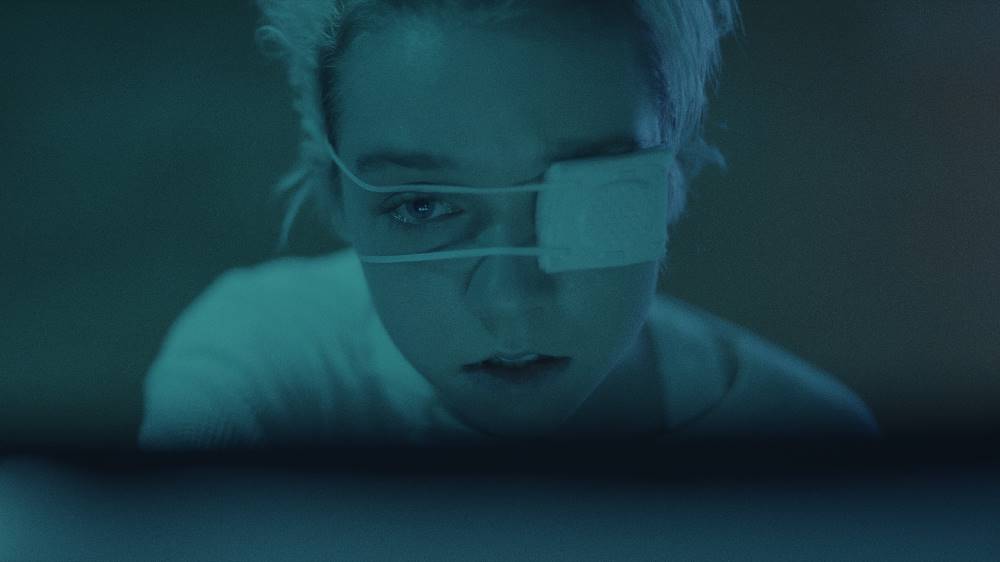 Nightmares are our mind’s own personal horror movies. Abstract or hyperreal, these stories we find ourselves in while we sleep are bone-chilling, haunted, and creep into the subconscious waiting to reveal themselves. Come True aims to explore the layers of the dreamworld, and the terrifying monsters that lurk in the depths of our minds. Yet the unconscious world writer/director Anthony Scott Burns dissects appears to evade him as well, with layers that lead to empty answers and a leading woman who is paper thin.

Sarah (Stone) is a young woman, fresh out of high school. She crashes at her classmate’s house because her home life is presumably bad, although Burns’ script is not interested in the details of why. Sarah stumbles her way into a college sleep study, and under a bundle of sleek looking wires and bulky sleepsuits, her dreams are recorded in fuzzy monochrome.

Come True is bathed in slick, sleepy lighting, saturated with the calming essence of blues, greys, and purples. Its languid cinematography matches its leisurely pace, with vibrating synths enhancing the trippy vibes Burns desires his audience to be engulfed in. It’s all very tired: a collection of indie sci-fi tools that have been timeworn. Flickering monitors, shadowed masculine figures, clean Apple-sleek tech: nothing about Burns’ film is aesthetically authentic.

Then there are the morals of Come True. An older male scientist, Jeremy (Liboiron), evidently finds himself crushing on Sarah, creeping her out enough to make her second guess her participation in the study. She bites at him, calling out his stalker-like characteristics, but once he’s called out she develops feelings for him as well. It’s backwards, and gross, to watch a young woman borderline of age (Sarah makes it known countless times that she is 18) get repeatedly fawned over by a much older man. Then to have her fall for it especially after acknowledging its creepiness is totally disparaging.

Come True’s vapid center is completely undone by a last-minute plot twist pulled right out of Japanese director Kiyoshi Kurosawa’s Real. Except where his film develops the trauma and grief for his characters in deep sleep, Burns’ fog-drenched merry-go-round of logic doesn’t develop his characters enough to give them desires. The film’s It Follows vibes are cool and moody, but a film should be just more than a calling card concept. It definitely shouldn’t rely on a text message reveal that totally recontextualizes the viewer’s entire journey, especially since the journey was never that engrossing to begin with.