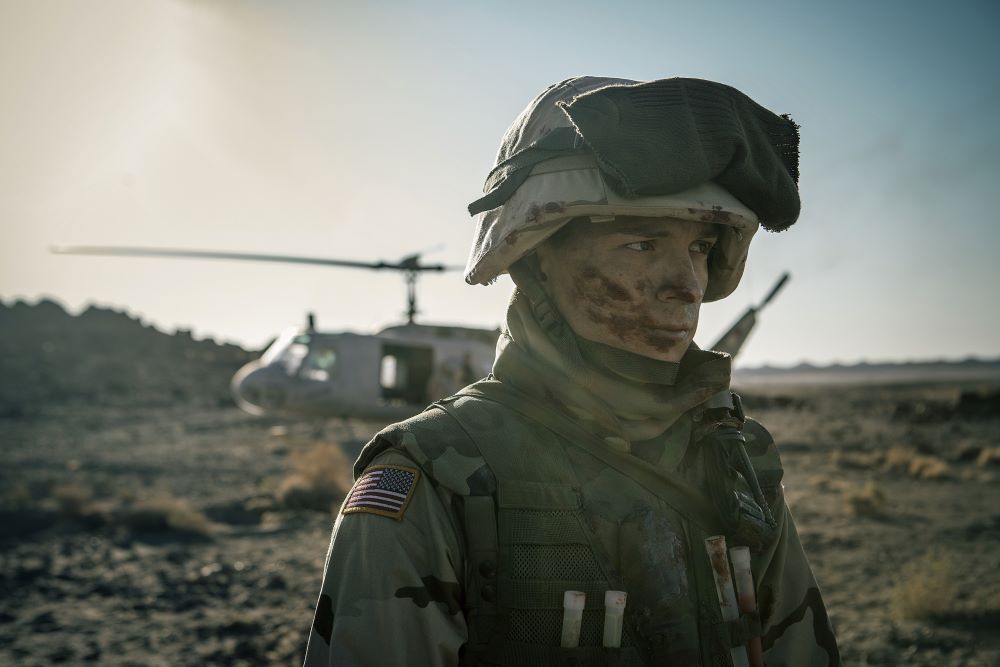 In too many cases, there's a direct line between PTSD and addiction. In American pop culture, PTSD is directly associated with the military. That's not surprising, since most people first or have only heard the term in association with the Iraq War (pick one) or the U.S. occupation of Afghanistan, so it's inevitable that the story of a junkie veteran would come back to the fore, war after war.

In the case of Cherry, adapted from the confessional and semi-autobiographical novel by Nico Walker, the titular Cherry (Holland) makes one key, pivotal, dumb decision. When his girlfriend, Emily (Bravo), dumps him to go to college in Canada, in a fit of pique he signs up for the military as a medic. His deployment to Iraq in the mid-2000s (a pointless mix of not being able to help the locals and scooping the guts into eviscerated grunts he'll never see again) leaves him with chronic PTSD. He doesn't develop his habit until he gets back, but a combination of chronic nightmares, prescription pills, and friends with a little extra lay all the stepping stones towards his eventual fate: holding up banks to pay for his next fix, and getting deeper and deeper into addiction and trouble.

In its depiction of personal disaster, Cherry is both big and small. Director duo the Russo brothers have produced what is basically a tick-tock recreation of Cherry's plummet from hardworking student to convicted bank robber. No steps are missed, which means packing a lot in very, very briefly. It's an inevitable path, with every tragic, predictable, realistic, seen-a-million-times, happened-a-million-times detail. It also ends up inevitably and accidentally referencing the long history of junkie films. There's grisly self-destruction, a la Requiem for a Dream; surrealistic glimpses of pills and needles that evoke Drugstore Cowboy; and the combination of Holland's voiceover, tweaked-out collapse, and classic rock that feel like the suburban cokehead sequences in Goodfellas; and, before the addiction, Cherry's trip through basic training and into the belly of war's beast that mixes the opening act of Full Metal Jacket with the sardonic bloodiness of Jarhead. It's not that Cherry is lacking in creativity, and it's definitely not hampered by any bad choices, or by performances – Holland makes a more-than-convincing bright guy plummeting to his doom, and the process of his decline is perfectly mapped out. The Russos themselves haven't shown this boldness of intimate style since their run on Community (fans of the sitcom may spot undoubted similarities), and they have turned their Avengers clout and Holland's Spider-Man star power to a story that never feels like award-season social grandstanding. Cherry is a small-scale tragedy, one repeated over and over again in broad sweeps, but still specific to this one instance.

The issue is that, when the audience knows the inevitable path, there are limited opportunities for surprises – especially since the Russos set the entire story as a flashback. Yet, for all its familiarity, Cherry could just be renamed American Truism. Just because it's a story we've seen a hundred times before doesn't mean it's any less poignant, pointed, or real.