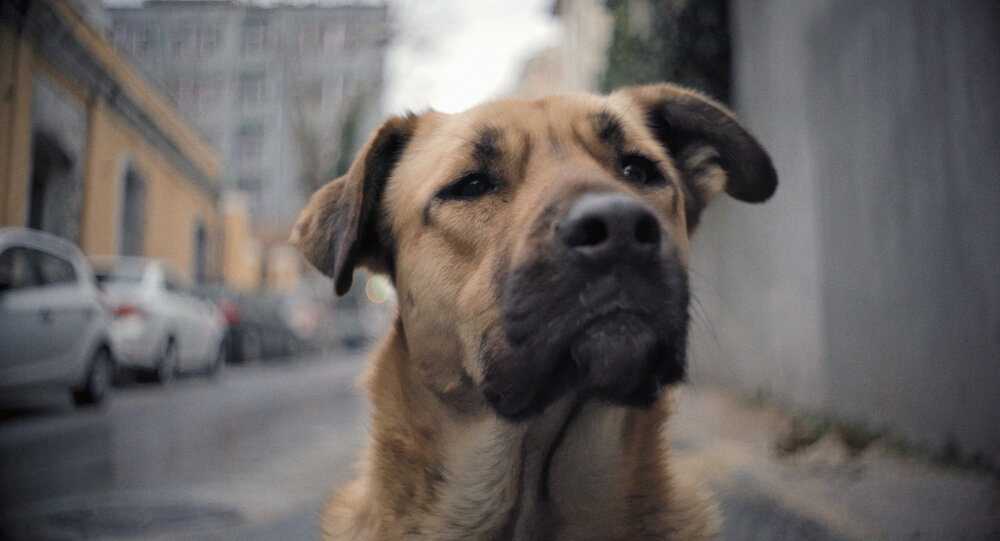 From its opening tracking shot of four furry legs sauntering through a bed of colorful pansies as cars and trucks whoosh nearby, Stray is a documentary of unhurried pleasures. Its ambulatory rhythm marks the pace of everyday life for a street dog named Zeytin, a weathered mixed breed who ekes out an itinerant living – along with thousands of others just like her – in the hustle and bustle of metropolitan Istanbul. In many large cities today, Zeytin and her kind are the exception to the rule, largely eradicated from public view by statutes and ordinances designating them public nuisances. But under Turkey’s more humane laws, it is illegal to euthanize or capture a stray dog. (Previously, the government promoted the mass killing of such animals during the 1990s, but the public backlash against this brutal slaughter prompted passage of protective legislation about fifteen years ago.) As Stray compassionately demonstrates, criminalizing the extermination of these free-range canines and requiring local governments to provide them medical care has solidified a cultural tolerance for Zeytin and her fellow travelers. While the film shows the occasional human annoyance with these homeless animals (a street vendor shoos them away from his food cart, an Asian tourist curses one pooping in a park), it’s obvious most of the people of Istanbul have openly embraced them, not simply as local mascots but as four-legged citizenry integral to the city’s social fabric.

The movie is a fitting bookend to the like-minded 2017 documentary Kedi, which focused on the compelling symbiosis between Istanbul’s freely roaming felines and its populace. (Zeytin briefly chases a couple of these kitties during the course of the film.) But while that equally remarkable film turned out to be as much about those creatures’ human caretakers as the cats themselves, Stray is content to document Zeytin’s daily existence in the spirit of something akin to canine neorealism. Wherever she goes, the camera follows, as if attached to some invisible leash, a wagging tail serving as your tour guide. It’s amazing how multihyphenate director Lo filmed the dog’s interactions so unobtrusively, including those with other strays like running buddy Nazar (yes, there is some butt-sniffing) and the sporadic Homo sapien. She must have forged a strong bond of trust with her leading lady to make a film this intimate, one full of closeups. As Zeytin makes her rounds each day, scavenging for food and looking for shelter, Lo cleverly eavesdrops on snippets of passing conversations (funny and not-so-funny alike) that – along with her close-to-the-ground camerawork – give you an inkling of the dog’s sensory experience. This is smart, dedicated filmmaking that deserves to be noticed.

Although Stray is a tonic for dog lovers, it also speaks to something greater than just the humane treatment of its animals. The movie crosses paths more than once with a homeless band of teenaged Syrian refugees, young men without a future who are always seen clutching plastic bags filled with glue residue, huffing their lives away. And yet, they show an almost innocent compassion and affection for Zeytin and her kind, going so far as stealing an adorable black-and-white pup named Kartal from a construction crew to raise as their own. Their presence in this film gives Stray an allegorical frame of reference. If hope can somehow work to salvage the lives of the mongrels and mutts wandering the streets of Istanbul, surely it can do the same for these lost souls.