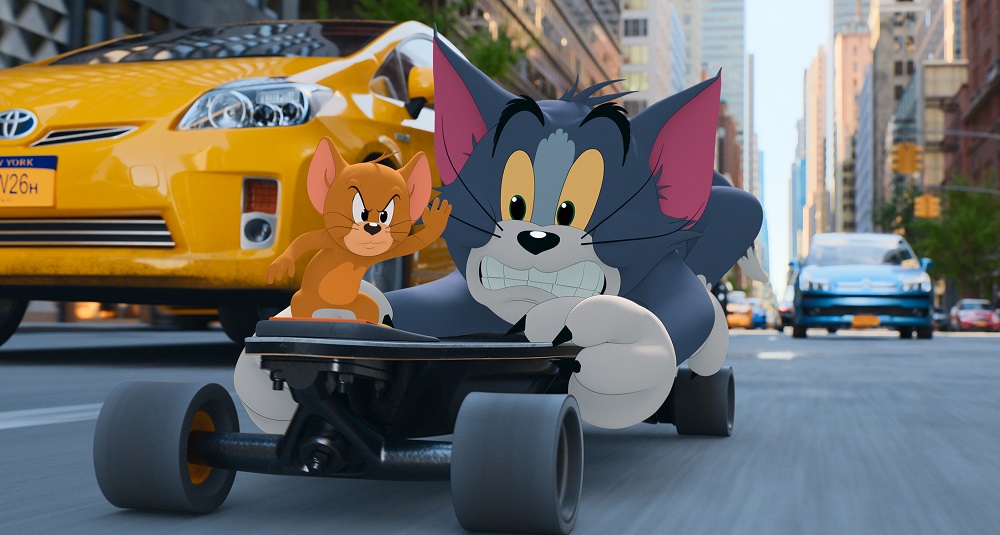 If it wasn't for the animation and the roster of comedy stars, you'd swear that Tom and Jerry fell out of the 1990s. Most especially, the mid-Nineties, when studios started digging into their old cartoon archives and trying to find ways to extract some new, fresh dollars. That's how the world ended up with live-action versions of George of the Jungle, Mr. Magoo and The Flintstones, a CGI-reliant Casper, and whatever Space Jam was.

Lately Warner Bros. has been digging deep into its own archive in comic form, with postmodern fusion takes on its Hanna-Barbera properties like Exit Stage Left: The Snagglepuss Chronicles, reinventing the pink feline as Truman Capote. But the animals that built Hanna-Barbera, troublemaking cat Tom and mischievous mouse Jerry, have eluded this kind of makeover – so far. Maybe it's because the original cartoons are so perfect in their simplicity. To launch any kind of reboot, you either have to match their genius (and good luck measuring up to William Hanna, Joseph Barbera, Chuck Jones or Gene Deitch on that front) or find a worthy reinvention. That challenge explains why there have only been two new Tom and Jerry cartoons in the last 43 years.

Tom and Jerry scores points for not attempting a character redesign, and it at least understands something pivotal about the cartoon twosome: that they're both to blame. Many of the shorts follow the same equation: Tom is dismissive of Jerry, Jerry gets disproportionate revenge, Tom seeks his own vengeance, Jerry gets the upper hand, chaos ensues. If only they could get along, the cartoons ask, what could they achieve? Well, that's the lesson learned halfway through Tom and Jerry, a live-action/animation fusion that gives the duo their first feature outing.

When Tom (Tom, reprising his classic role) and Jerry (another welcome return) end up in New York, they've clearly fallen on hard times. No stolen cheese and fluffy pillows: instead, Tom is a busker, dreaming of performing with John Legend, and Jerry is still derailing his plans. Yet they are secondary to the lives of the humans around them, most street-smart Kayla (Moretz), who cons her way into a job at the swanky Royal Gate Hotel, organizing the wedding of tabloid darlings Preeta (Sharda) and Ben (Jost). Of course carnage results, as Jerry moves in, Tom gets hired to oust the mouse, and suspicious administrator Terrence (Peña) makes life more complicated for everyone.

But from the opening jam of pigeons singing A Tribe Called Quest's "Can I Kick It" through visual nod to Tim Burton's Batman, Tom and Jerry feels wedded to those revamps of 30 years ago. It's not aimed at kids (although they'll probably enjoy the slapstick), but at parents who grew up on the 2000 Scooby-Doo, and will get something from the meandering plot about Preeta and Ben's communication skills. Kevin Costello's script is a plummet from the joyous, childlike creativity of his work on Brigsby Bear, and Tim Story's workmanlike direction never hits the cuttingly chaotic energy of the original shorts. And maybe that's what it comes down to: the short format. There are some great sequences of just Tom and Jerry that feel like Tom and Jerry. There's just so much else, too much else, going on, and most of it involves the cast staring at animated animals added in post. The lack of interaction makes it feel more like the original Pete's Dragon than even Who Framed Roger Rabbit, and that was three decades ago. The cast seem afraid to truly embrace the fact that there are cartoon critters right next to them – all save Ferran, showing unexpected comedic panache as Joy, the slightly off-kilter bell hop.

Maybe all that's needed is to do more Tom and Jerry shorts, like how Disney found a path for Mickey Mouse, after decades of being little more than branding, with the delightful Mickey Mouse shorts. Maybe we need two hours of Tom and Jerry (and hopefully Joy), but not in one block.