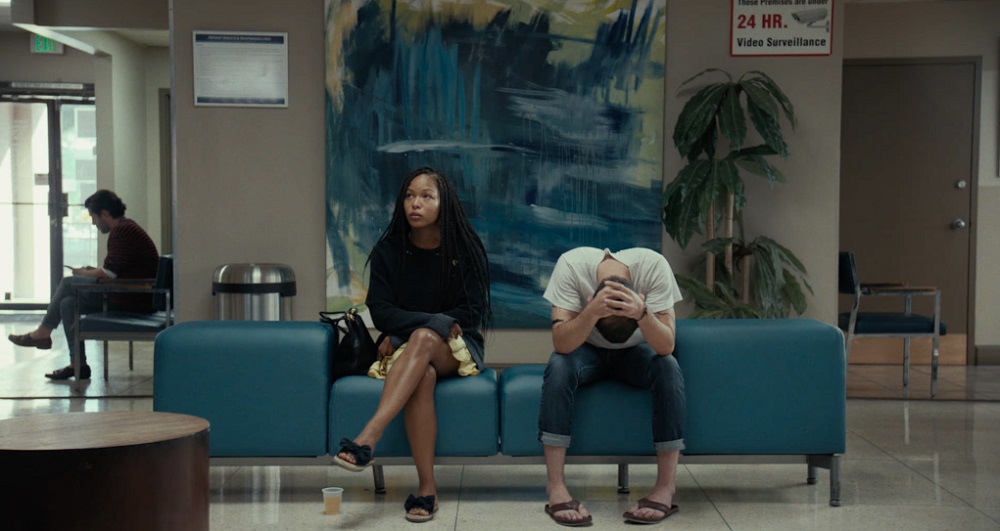 Set in Austin, Test Pattern sees a Black woman named Renesha (Hall) through her awkwardly sweet beginnings with her white boyfriend Evan (Brill), the stability and care of their relationship a few years down the line, her sexual assault by a stranger met on a night out (Fuller), and Evan’s inability to grasp why medical and carceral systems fail her. In this debut film, writer/director Shatara Michelle Ford almost seems to have set themself a creative puzzle to solve about portraying pain and trauma in film. How can we feel as much as possible while seeing the least?

We see the drinks and weed gummies Renesha is casually pressured to accept, but what follows is more abstract. A few forced kisses on the dance floor, but some are unclear — she jerked away, but did she get her lips away in time? The camera doesn’t have proof, so neither do we. We see Renesha in the man’s car, but not how he got her in there. In the morning, when she wakes up beside him having forgotten it all, we don’t remember any more than she does, besides that we both know all too well what it looks like. And the film is never more careful and tender than when Renesha finally gets a moment alone: in a hot bathtub, her long braids cover most of her face as Robert Ouyang Rusli’s swelling score stifles the sound of her sobs.

Test Pattern is also a film about race, though it rarely comes up in the dialogue. Driving Renesha from hospital to hospital in search of a rape kit, Evan cannot get it through his head that no one will make an effort to help her. He’s rightfully enraged by what Renesha’s endured, but can’t stop to listen to her softly but clearly stated needs: She wants to go home. She wants him to stop arguing with unhelpful hospital personnel. She doesn’t want to get the police involved. In between it all, Ford cuts to “innocent” flashbacks of the couple — sexual come-ons where you call someone “yours,” or minor arguments about punctuality — where the racial undertones are only clear if you’re truly listening to Renesha or if you’ve lived those moments yourself.

Ford’s commitment to implying trauma instead of visualizing it is more than just an impressive formal constraint. Test Pattern proves the fault of more uncreative depictions of racial and gendered violence that exploit bare bodies and blood for shock value rather than depth and specificity. Here, the illegibility mimics how Renesha is made invisible by larger institutions, her partner, her job, her friends. The approach also becomes an important exercise for the viewer. Ford demands that we work to believe this Black woman’s experiences, whether they’re explicit or not.

Available now as a virtual cinema release via Kino Marquee.