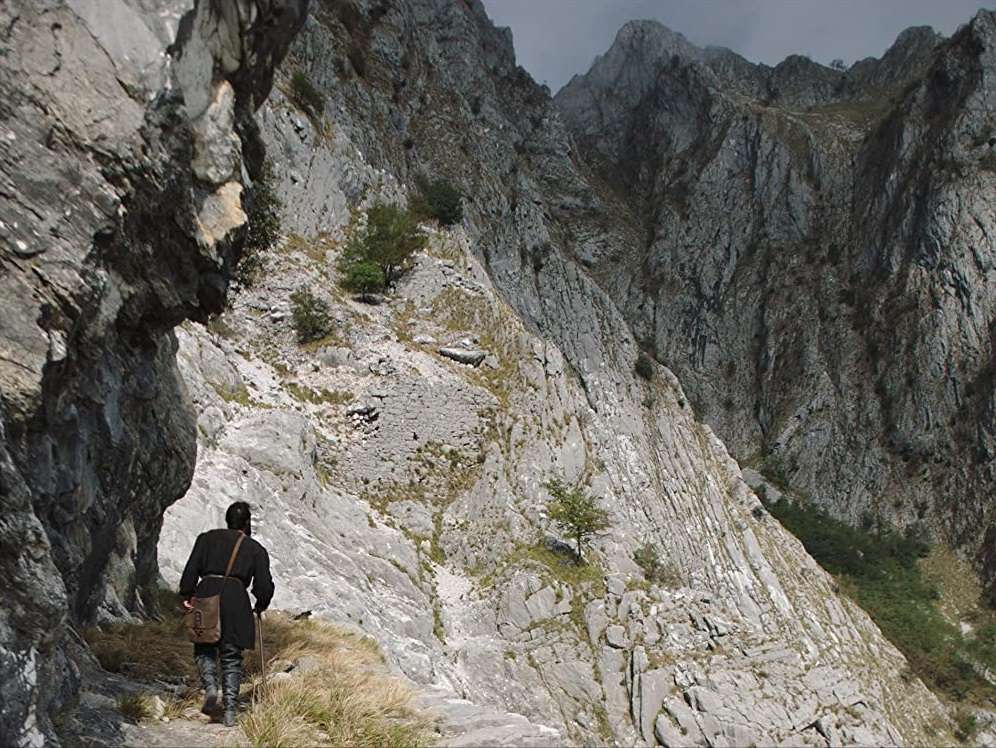 Renaissance man extraordinaire Michelangelo Buonarroti is frequently accused of greed in the incohesive historical drama Sin, but the only real transgression is his pride, whether it’s nurturing his own divine genius or badmouthing the mediocrity of contemporaries like Leonardo and Raphael. Ponder the sculpted magnificence of David’s musculature or the epic sweep of the Sistine Chapel’s frescos, and the offense is easily forgiven. But in director Konchalovskiy and Elena Kiseleva’s screenplay, Michelangelo’s artistic communion with God also bred a debilitating madness. Fearing hellish retribution for his obsessive perfectionism, he imagines the Devil is always just a few steps behind him, eager to relieve him of the burden of his gifts. It’s a portrait of the artist as a near-middle-aged paranoid, though the gaunt and haggard man with wild eyes portrayed by the fifty-something Testone looks as if he’s already lived several tormented lifetimes before the film even begins.

Sin takes place in the early 16th-century during a relatively discrete period of time in Michelangelo’s life, following the five exhausting years spent on his back painting the vaulted ceilings in the late Pope Sixtus IV’s Vatican chapel. The victim of his own stellar reputation —by age 30, he was known as “Il Divino” — he finds himself caught in a tug-of-war between two feuding noble families. On one side, the Della Rovere dynasty that produced Pope Sixtus IV and his successor Pope Julius II, who commissioned Michelangelo to build an elaborate memorial tomb in Rome. On the other, the House of Medici, which seated Pope Leo X upon Julius’s death and likewise commissioned the long-delayed completion of the façade of the Basilica of San Lorenzo in Florence. The back-and-forth battle for the overextended Michelangelo’s loyalty is potential material for dark comedy as he plays both sides of the fence and is rewarded more money to underwrite the projects with each confrontation. But the two families’ mutual pursuits of his contracted services inevitably leave him all the more bedeviled. The film leaves you hanging, ending with a puzzling 11th-hour epiphany followed by a cheesy greatest-hits montage of Michelangelo’s masterworks, and a cryptic closing shot of the seemingly woke artist carrying a wooden model of St. Peter’s Basilica, his last great achievement. Indeed, God must work in mysterious ways.

With its emphasis on political rivalry and Catholic angst, Michelangelo’s creative processes take a back seat in the film. Early on, you briefly see him begin to fashion a monumental sculpture of Moses for Pope Julius’s sarcophagus, while later a veiled maiden leaning against a blindingly white block of Carrara marble inspires the Pietà, the famous sculpture in which the Virgin Mary cradles the dead body of her son. But most interestingly, the laborious and lethal process by which a humongous chunk of the same type of stone is cut from the side of a mountain and then transported downhill harkens the memory of another film lunatic who hauled a steamship over a steep hill in the heart of the Amazon. It’s only during this extended sequence that Sin rises above its self-flagellation and fully embraces its madman as visionary.