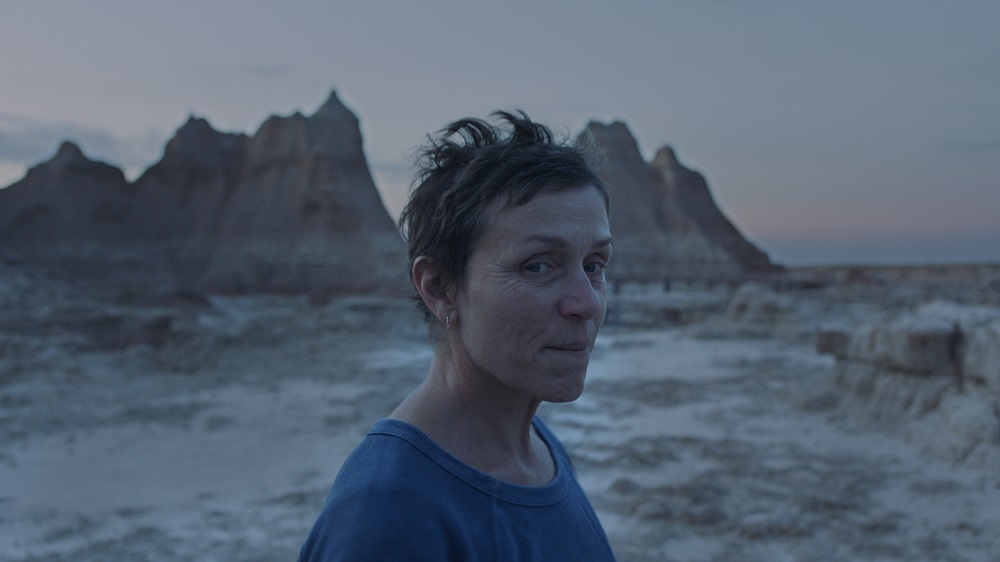 The nomads of this film are modern-day vagabonds, mostly older Americans who live and travel in their camper vans, creating an itinerant labor pool and community. Some are engaged in this lifestyle by choice and love the open road and freedom of not being tied down to a place, job, or family. Most others are just there by circumstance, having lost a home, job, or spouse during the Great Recession and then whittling their lives down to what can fit in their vans. As Fern (McDormand), Nomadland’s protagonist, emphatically declares: She is houseless, not homeless.

As usual, Oscar-winner Frances McDormand delivers a rich, physically detailed performance that leaves as much under the surface as above it. Even though the film is based on Jessica Bruder’s nonfiction book Nomadland: Surviving America in the Twenty-First Century, Nomadland is Fern’s story. The film includes some of the individuals highlighted in Bruder’s 2017 book: Linda May, Swankie, and Bob Wells, a popular proponent of “vandwelling” and founder and guru of the annual Rubber Tramp Rendezvous. The professional actors – McDormand and David Strathairn – mix with the nomad non-pros, in particular, the three mentioned here. But make no mistake, this is McDormand’s film through and through.

Nomadland resembles filmmaker Chloé Zhao’s previous two films, The Rider and Songs My Brother Taught Me, in that it occupies an opaque space between documentary and fiction, a precarious territory that Zhao mastered seamlessly in her prior work. It’s little wonder that once McDormand saw The Rider she knew Zhao was the right person to approach to make a film adaptation of Bruder’s book, for which McDormand had recently purchased the rights. McDormand’s instincts were on target. However, as good as Nomadland is, the film is not quite as good as The Rider, Zhao’s award-winning previous film, is.

Perhaps living up to its title, Nomadland has a tendency to wander. There are wonderful, gloriously filmed, and deeply moving sequences in the film. Every one of them includes McDormand’s Fern in the action. Oftentimes, there are prolonged sequences of Fern merely walking amid the natural landscape. (The movie was filmed in Nevada, the Badlands, California, and Arizona.) For the first hour, this episodic approach works, but then the film loses momentum as it follows Fern for a little over a year in her journey. Although Fern is a generally agreeable person, she is not effusive, thus we learn about her past history in bits and pieces. An opening credit informs viewers about her home town, Empire, Nev., a company town which became a ghost town after the gypsum plant shut in 2011. In short order, Fern lost her husband, her town, and her home. Like many of the nomads, Fern is a middle-aged widow or widower. Along the way, she passes up a few opportunities to put a new roof over her head when friends and estranged family members offer her permanent shelter, so we know she’s committed to this lifestyle.

Yet we never get an intimate sense of Fern’s inner thoughts. We see details of her jobs: working the annual shift at an Amazon warehouse (including amazing inside shots the facility), working a beet harvest, scrubbing gross toilet facilities at a roadside camping site, and scraping hamburger griddles. The viewer never has the feeling that McDormand is not actually doing the labor or is getting the star treatment. Everything we witness seems real, so put lots of check marks in the film’s documentary column. The problem with Nomadland, however, is that there is too little story, or fiction. Unlike her earlier films, Zhao did not generate Nomadland from scratch by herself. The character of Fern was created for the film, but the filmmakers neglected to erect a storyline for her. And since we are kept emotionally distant from Fern, Nomadland doesn’t truly succeed either as a character study. McDormand turns Fern into a great protagonist, but she lacks narrative direction. By the end, Nomadland frustratingly wanders off the edge of the map.

Available in theatres and on Hulu. 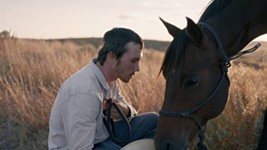 The Rider
Powerful docudrama of life on the range.