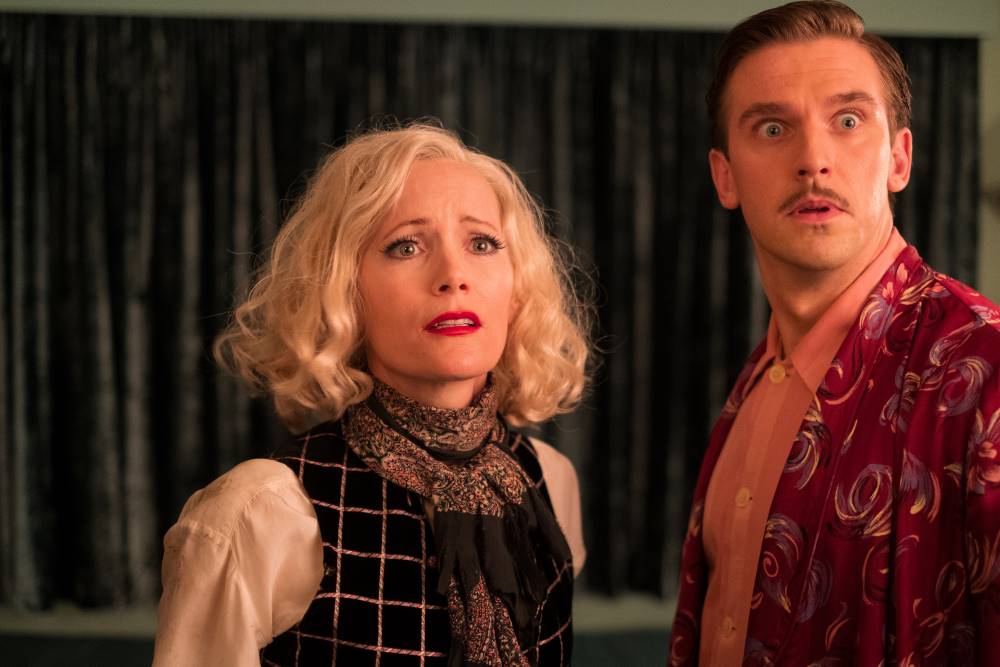 Noël Coward’s ghostly comedy Blithe Spirit first hit audiences back in 1941 in the West End. However, if ghosts are real in the sense that Coward imagined them, surely he was haunting this ghastly adaptation of his play.

The real spirit of this play is Elvira (Mann), a successful mystery novelist’s late wife who is summoned from the dead after a washed up spiritualist (Dench) accidentally conjures her. This is a wonderful convenience for writer Condomine (Stevens), who used his previous wife’s stories for his books, but this twisted ménage à trois is the last thing his new wife (Fisher) wants to compete with.

Director Hall hails from the theatre, but from his adaptation of Blithe Spirit you would not assume so. The script by Piers Ashworth, Meg Leonard, and Nick Moorcroft (merely "based" on Coward's witty gem) jumbles up the classic play’s material, attempting to punch it up with “modern” jokes about bed performance and pill popping, but adding subpar scandalous gags to a 1930s setting is hardly unique these days. In fact, the film lacks the kind of sharp, punchy dialogue the play demands and supplies. Dead air lays stagnant throughout what should be quippy jostles, and the performances themselves from the likes of Stevens, Fisher, and Mann aren’t big enough, or even fun. As Madame Arcati, the medium who starts all this trouble, poor Dench is left in the cold. Her classical training is perfect for this light kind of farce, but it’s hard to brighten up a space when mediocrity haunts you.

There’s also something quite flat about the way Hall directs cinematographer Ed Wild to shoot the otherwise gorgeous modernist Joldwynds estate. Colors that normally pop are drab and unexciting, and like Elvira once exclaims, the entire home seems to have had “the life and soul sucked out of it.” Nothing feels lived in, everything looks cheap, and lost are the lush, beautiful grounds that usually make these high dollar English mansions so luxurious.

Truly it is the tone that weighs this particular production of Blithe Spirit down. Stevens plays it too earnest and ignorant to be a womanizing scumbag, and the battle of the wives between Fisher and Mann not only feels outdated by the way Hall updates the script but extremely twisted when Fisher finds herself a ghost as well. There’s a sincerity woven into the film’s fabric that does not connect with the play’s wacky absurdity, a wistful nostalgia that’s totally misplaced.

Completely miscast with uninspired production, this remodeling of Blithe Spirit is a faint shadow of its Coward roots, a resurrected retired poltergeist without its same purpose or vigor.