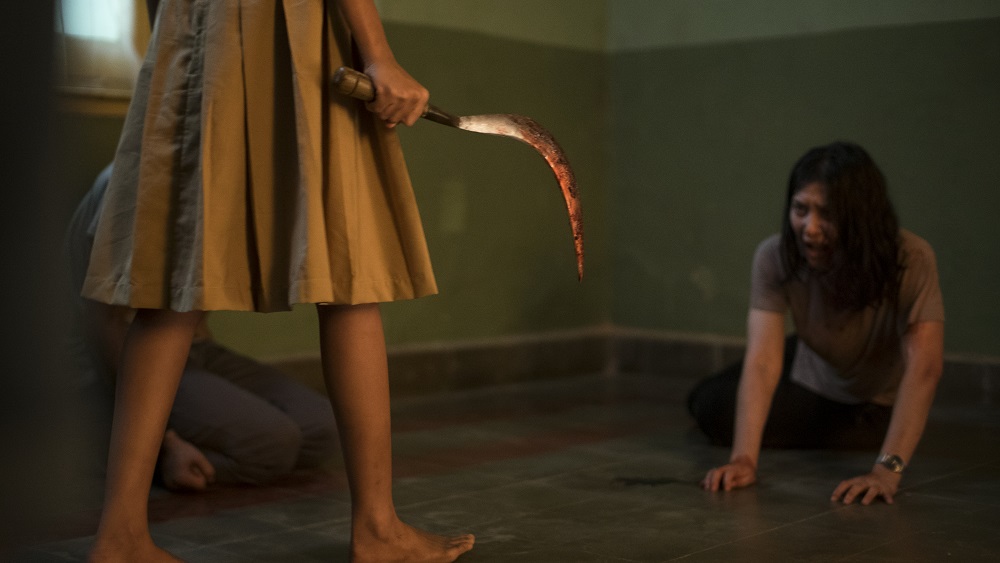 The Queen of Black Magic

If there are two signatures to Indonesian horror, they would be an overwhelming sense of relentless dread, and poisonous centipedes. The Queen of Black Magic has plenty of both, and an enthralling supernatural siege story binding everything together so tight you'll barely be able to breathe.

This sinister monarch is actually a sort-of remake of the 1981 Indonesian horror of the same name, which was actually an unlicensed spin-off from Black Magic and Black Magic 2, the mid-Seventies hyper-gruesome horrors by Hong Kong action experts the Shaw Brothers. The script by Joko Anwar follows much the same broad approach as he did with his own revolutionary remake of groundbreaking 1981 shocker Pengabdi Setan (aka Satan's Slave) by taking the loosest elements of the original (in this case, a witch seeking body-mutilating revenge from beyond the veil of darkness) and throws pretty much everything else out.

What he and director Kimo Stamboel craft instead is a disturbing psychodrama, then they layer it with highly effective supernatural chills - before just breaking out the body parts and spraying the screen with every imaginable fluid that's supposed to stay inside of the human body. Not that Hanif (horror regular Bayu) or his family could expects to see any of that. They've cancelled a vacation in Bali to visit the rural orphanage where Hanif was raised. It's a tragic reunion as the old man, Pak Bandi (Unru), that raised and guarded them there is on his death bed, and Hanif and his closest friends, Anton (Ginting) and Jefri (Khan), have come together for a farewell.

It almost has the underpinnings of a drawing room drama: Hanif and his wife, Nadya (Al Rashid), have the family that Hanif lacked as a child, but tensions riddle all relationships, especially as the wives are forced to contend with each other, while Hanif and Nadya's kids try to find some common ground with the handful of orphans still at the rambling mansion in the remote countryside. But the uneasy score by Yudhi Arfani and Fajar Yuskemal, always rumbling in the background, and the sickly, febrile cinematography of Patrick Tashadian elicit a sense of impending dread that The Queen of Black Magic pays off with interest, insects, ichor, and bile.

As one-half (with May the Devil Take You director Timo Tjahjanto) of notorious bloodbath experts the Mo Brothers, Stamboel stabbed a gash into the global horror map for Indonesia with their unrelentingly blood-soaked Macabre (a Fantastic Fest fave in 2009). After taking a slightly softer approach to horror with 2019 videogame adaptation DreadOut, now the gloves are off. First, the screw is turned, as old secrets and stories about the orphanage begin to stir, before Hell opens wide and vomits forth all manner of carnage and misery. Indonesian horror, especially that with a twist of the uncanny, is never afraid of suppurating corruption and Stamboel doesn't just break bodies - he twists them, then lets the rot in. That's probably the biggest homage to the original, as shown in a selection of particularly eye-popping and stomach-churning effects shots from the original over the closing credits.

But just as with Macabre, Stamboel has built up so much emotional weight that the explosion of mystical violence doesn't feel like he tagged an FX reel onto a drama instead of a resolution. The meaner it gets, the more you care, and The Queen of Black Magic earns every twist of the knife.

A version of this review ran as part of our Fantastic Fest 2020 coverage.