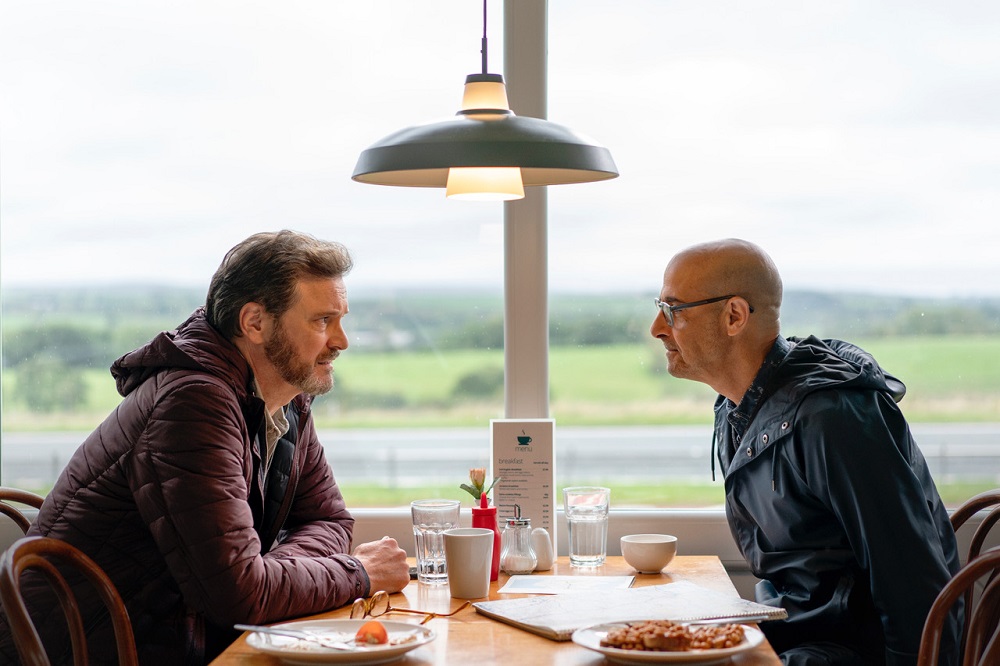 Remember the time – it wasn’t that long ago – when an actor’s decision to play a straight-up gay man on film was considered an act of professional courage? The merits of his performance aside, some think Tom Hanks (Philadelphia) was rewarded with an Oscar for his “bravery” in defying long-standing Hollywood wisdom about portraying queer characters onscreen (much less queer characters with AIDS), flipping the script from career suicide to career move. But any expression – or even suggestion – of physical intimacy between Hanks’ fired lawyer Andrew Beckett and his devoted boyfriend, played by a gorgeous Antonio Banderas, was frustratingly scrubbed from the original script in a purported effort to not scare anyone away. The young man portrayed by Hanks is fighting for his life and dignity, and all he gets is a chaste off-camera kiss?

In the elegiac Supernova, a misleading title for a film graced by the light of its twinkling stars, sixtyish actors Firth and Tucci (both straight in real life) portray a gay married couple, Sam and Tusker, respectively. They hold hands, cuddle, spoon, caress, and kiss so naturally, without the slightest self-consciousness, it seems inconceivable such affection and tenderness between males remains a rare thing in movies, even today. The pair are travelling through scenic rural England in an RV to visit old haunts, which include the place in the Lake District where they first met and Sam’s childhood countryside home, where his sister and her family continue to reside. The two men bicker with mild but good-natured irritation as only a long-standing couple can: Tusker criticizes Sam’s driving skills, while Sam calls out Tusker’s map-reading capabilities. But as stable as this relationship may appear, there’s an unspoken tension, mostly registered in Sam’s worried demeanor. When Tusker occasionally looks lost in thought, he’s actually lost his thoughts. Two years after a dementia diagnosis, his condition is now declining rapidly. It’s just a matter of time before Tusker disappears completely. Tick tock, tick tock.

The two seasoned actors acquit themselves beautifully throughout. More wryly stoic than noble, Tucci captures Tusker’s resignation to his fate with a glint of gallows humor. When someone kiddingly comments he’s not the guy Sam fell in love with, Tusker agrees. “No, I’m not,” he responds. “I just look like him.” Firth arguably gives his best performance to date here. When the sentimental journey explodes into a third-act truth-telling confrontation between the husbands, Sam struggles to communicate that he’s prepared for the worst, but in the same breath, confesses his dread of the inevitable future. Firth flashes the character’s anger and sorrow and fear in a dam-burst of jumbled emotions spilling out from a man who has long kept it together for the sake of his loved one. With these two actors in command, Supernova doesn’t just dare to speak the name of a love between two deeply committed men facing an untenable situation. It shouts it from the rooftops.