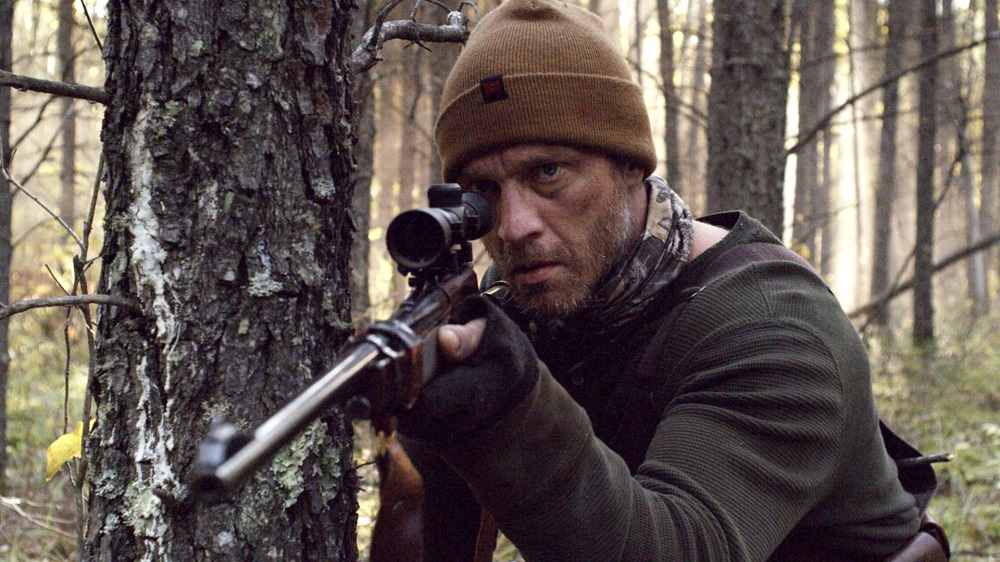 The most traumatizing sound in a horror movie is not a a broken bone, or a gushing wound. It's the sound of a soul breaking. That's what made the most brilliant and disturbing films of the 1970s – films like The Texas Chain Saw Massacre, I Spit on Your Grave, and The Last House on the Left – so impactful. It's a keening wail, a silent inhalation, the stomach drop of knowing that the characters who survive will never be whole again. That nightmarish realization is what separates the brilliantly brutal and truly shocking Hunter Hunter from many of its contemporaries.

The surgical deployment of a needle drop from Danish post-psychedelic gothsters Tales of Murder and Dust is the moment that seals it for Shawn Linden's story of the destruction of a family by outside forces. That's exactly what father Joe Mersault (Sawa, grizzled and gristly) was trying to avoid when he took his family out into the backwoods to become a fur trader. His wife, Anne (Sullivan), knew what she signed up for, even if this hard-scrabble existence isn't what she might have chosen for their daughter, Renee (Howell). It's hard to tell exactly what Anne resents: this bloody, muddy life, or the fact that Renee is adapting to it a little too well. They live beyond the fringes of order, as noted by the local Rangers (Cochrane and Daniels), who spend most of their time dealing with folks who have brought second homes and don't know not to leave their trash cans where bears can get them.

Much like Jeremy Saulnier's trip into the long Alaskan night of the soul, 2018's Hold the Dark, the collapse of the very idea of civilization begins with the incursion of a wolf. The family sees a dual risk, to both life and income, but Joe's decision to deal with the predator himself opens the door to a bleakness. Yet coming for all with subtle speed is a catastrophic fate, built on the idea that only the most merciless survive.

What makes Hunter Hunter so special is that the first half hour feels like a cousin to Debra Granik's haunting Leave No Trace or Annie Silverstein's Bull, both depictions of underseen lives on the outermost fringes of society. This time, it's the kind of family that has embraced the last dying embers of the backwoods trapper, barely surviving in rural Manitoba. This is a life of putting cans back when you get to the cash register, of gutting and skinning, of scat and musk. Joe has taken his family to the other side of the edge of society, and it's hard to see how they can ever come back. That's their choice, but the intrusion of a wounded stranger (Stahl) adds a new component, a survival thriller aspect that catches the family's core conundrum: If you're off the grid, the grid can't protect you.

But it's the final act that takes that final twist of the knife, as the thriller becomes a grand guignol horror, yet still based within the world and the rules established in that grounded opening. It's true horror, summed up in a tiny moment, a miniscule drop in the face of Cochrane's shattered Ranger. It is a moment of realization that makes Hunter Hunter both deeply emotional and utterly chilling. When that needle drop ends, souls have been broken. That's what makes Hunter Hunter an extraordinary entry in the modern horror canon.